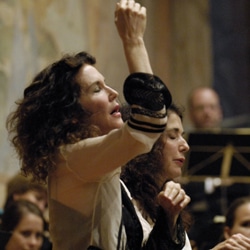 Gstaad, famous as a fashionable winter resort, is idyllically situated at 1,050 metres above sea level, in the Swiss Alps.

The town has played host every Summer since 1956 to the Menuhin Festival, which takes place in a number of villages in the vicinity.

Founded by Lord Menuhin, one of the 20th Century’s finest musicians, the festival boasts a line-up of top-class artists and an exciting programme of great music.

At the risk of sounding like a cheap travel guide, the Swiss of this area are very hospitable, friendly people and the surrounding scenery is of astonishing beauty. People who only know Switzerland from its winter sports, miss out on the lush greenery that the snow gives way to in the Summer months. The alpine air tastes like fine wine.

It is said locally that the population of 7,000 people is matched by an equal number of cows grazing on the mountains (although it’s probably now only 6,999, as I think I ate one on my visit). My hotel, the Steigenberger, sitting picturesquely above the village of Saanen, is a 5 star masquerading as a 4 star, especially in the kitchen, and the level of service is something we can only dream of in the UK.

Since 2002, the Menuhin Festival has been programmed by the dynamic young artistic director, Christoph Mller. Menuhin was director himself until 1996 and remained involved until his death three years later. A slightly unstable period followed before, as its President Leonz Blunschi told me, the turn of the century gave them Mller “as a gift”. Blunschi, a charming and talkative man, who was involved in the hotel business all his career, has been President since 1991. His work on the festival is clearly a passion for him and he talks eagerly of plans for the coming years.

The programme is now fixed for 2008, with much of the following two or three years already falling into place. Mller, equally likeable and enthusiastic, brings a wealth of contacts as well as a keen business sense to his job. He has been managing director of the Kammerorchester Basel since 1996 and is also now artistic director of the nearby Interlaken Classics, another festival taking place in Spring with a complementary programme.

As in the UK, there has been a proliferation in the number of annual festivals and, in a country with a population of just seven million, there is inevitably much competition for audiences and, crucially, business sponsorship (Blunschi jokes that when people with money in Switzerland see him, they cross the street to avoid him).

Despite this, the Menuhin Festival can boast a yearly increase in attendances of between 5 and 7%. Last year saw a total attendance of 19,000, with more expected in the current season of over 40 events during a seven week period.

The big draw of the first concert in this year’s festival was the glamorous Labque sisters, Katia and Marielle, who gave a performance of Mozart’s glorious Concerto for Two Pianos, K 365. The Kammerorchester Basel was conducted by the young Italian Giovanni Antonini, a favourite of Simon Rattle’s, who is fast making a name for himself as director of the baroque ensemble, Il Giardino Armonico.

The sisters gave an empathetic performance of the concerto, melodies ricocheting between the two and the Swiss band accompanying sensitively. The Labques were scheduled to play Mozart’s Sonata for Two Pianos, K 448 as well but, sadly, an injury to Marielle’s hand the day before prevented it and almost threatened the whole concert. Instead, they turned to a composer much-loved by the French sisters, Ravel (not his Concerto for Left Hand, as that was the one she had damaged), rather a number of pieces in arrangement for two pianos from Ma Mre L’Oye, something they have recently recorded. It was a delightful crowd-pleasing choice beautifully performed.

The Kammerorchester finished the concert with a wildly exciting performance of Beethoven’s 4th Symphony. Antonini and the orchestra are undertaking a complete cycle of the symphonies and, if this was anything to go by, they should get it on disc sooner rather than later. It was a truly fresh and thrilling approach leaving one in no doubt that this least-performed of Beethoven’s symphonies is every bit as great as the others.

The Kammerorchester Basel will visit London next January with a concert on the South Bank, under Paul McCreesh.

Like the opening concert, the second one on the following evening took place in the lovely little church of St Mauritius in Saanen. This was the setting for the inaugural concert of the festival in 1956 (when Menuhin was joined by his friends Benjamin Britten and Peter Pears) and it is still one of the major venues used throughout the Summer. It is characteristic of many churches in the region, with its chapel separated from the nave by a circular arch, forming a sort of natural proscenium.

The acoustics are excellent, without the echo of many churches, and these intimate surroundings are perfect for performances on this scale although, with only 800 seats available, ticket prices tend to be quite high (top wack is 160 Swiss Francs or about 64).

For conductor Malcolm Singer, the venue has particular personal resonances, because, as a young composer, he heard one of his works performed there by Lord Menuhin. Now Director of Music at the Menuhin School in Surrey, he brings the school orchestra to the festival bi-annually.

The programme for this concert was called “Klezmer and Serenade”, with a work by Tel Aviv-based composer Menachem Wiesenberg providing the former and Elgar and Dvorak the latter.

Wiesenberg, who was present at the performance, wrote his Concerto for Classical Violin, Klezmer Violin and Strings in 2006 for the school’s string orchestra, at the behest of Sophie Solomon. It was premiered in the Menuhin School’s new concert hall last year and was here performed admirably well by two of the student violinists, Nigulia Mirzayeva and Aisha Syed.

Wiesenberg’s father had been a performer in the klezmer tradition, the practice of travelling from wedding to wedding, so the music is deeply rooted in the composer’s experience. He is currently re-arranging the piece for the highly unusual combination of viola and cello to be performed in Israel. The work is a joyous coming together of different traditions and looks set to make quite a mark in the future.

In the second half of their programme, the young musicians stepped up a notch with a poignant performance of Hindemith’s lovely Trauermusik, dedicated to the school’s late president Mstislav Rostropovich, the violin solo movingly conveyed by Luke Turrell. The final piece, Dvorak’s Serenade in E, with a yearningly lovely first movement and joyous dancing in the second, went on to show a refinement of playing that belied the years of the students.

The next day the orchestra gave an open-air performance at the top of a mountain (without oxygen masks I believe) before travelling on to Tuscany for more concerts. I wish I’d had opportunities like that when I was at school!

Future festivals will see the return of the London Symphony Orchestra to Gstaad, performing Mahler with Valery Gergiev and Daniel Harding (the town is still talking about Colin Davis’ monumental performance of Beethoven’s Ninth last year). While Christoph Mller won’t be drawn on specific plans, he did let slip that next year will also see a concert performance of Die Fledermaus with Angelika Kirchschlager, which will take place in the huge tent that is erected in the middle of the town housing some of the bigger scale events.

You can read about the remainder of this year’s extensive festival programme here, and, if you find yourself yearning for a holiday in a paradise setting combined with some world-class music-making, then future Menuhin Festivals in Gstaad cannot come more highly recommended.