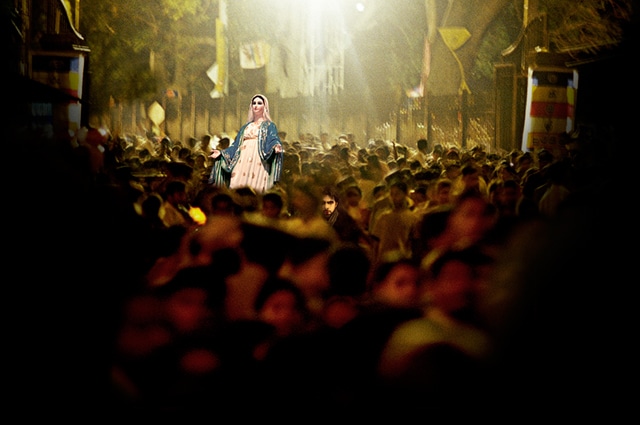 Cav and Pag, those two venerable verismo warhorses, were back at the Royal Opera House after an absence of 26 years, reunited as inexorably as cheese and onion or fish and chips. And rather than limping back onto the country’s leading operatic stage like a couple of old nags ready for the knackers’ yard, they galloped back on, nostrils flaring, manes blowing in the wind like a couple of prize stallions. Indeed this was one of the most thrilling first nights I can remember at this address for years. Despite a couple of vocal misgivings, musically and dramatically The Royal Opera has a well-deserved success on its hands.

Many in the audience were nervous about what Italian director Daminao Michieletto might ‘do’ to these late 19th century works given the apoplectic reaction of many to his staging of Guillaume Tell this summer. Not having seen that production it’s not fair to comment, but we needn’t have worried as he and his regular collaborators, Paolo Fantini (sets), Carla Teti (costumes) and Alessandro Carletti (lighting) delivered knock-out stagings of both works that simply demand repeated viewings.

A mere three years separates the two operas, yet until now the main reason to perform both together on one evening seems to have been the brevity of each work (1 hour 15 mins, and 1 hour 20 mins), and the fact that they share the same musical idiom. Michiletto is having none of that and combines the stories and characters from both operas, which unifies them, adds dramatic gravitas and not only deftly sets the scene for Pagliacci in Cavelleria Rusticana, but ties up Cavelleria Rusticana’s loose ends in the ensuing opera as well. 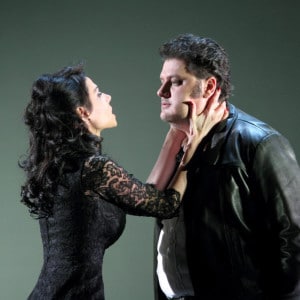 Set in the ‘80s, Fantini’s detailed, evocative designs are set on a revolve, allowing fluidity in Cavelleria Rustican and for us to be part of the audience as well as being voyeurs on the backstage shenanigans in Pagliacci. Cavelleria Rusticana opens with Beppe putting up posters for Pagliacci whilst Nedda hands out fliers, and in its famous Intermezzo we see the burgeoning love between Nedda and Silvio (a baker in the Panificio) take flight. In Pagliacci we witness a distraught Santuzza being comforted by a priest, before being reconciled with Mamma Lucia. It all makes total dramatic sense, and thrilling theatre.

In the pit Antonio Pappano was in his element. This music courses through his veins and he drew full-blooded playing from the orchestra that was at its responsive best. The augmented chorus was superb and the couple of lapses of coordination between stage and pit will no doubt be ironed out as the run progresses.

The cast was generally outstanding. Once Eva-Maria Westbroek settled down after a shaky start she was a committed and thrilling Santuzza, ably partnered by Elena Zilio’s sensational Mamma Lucia who rightly was awarded the loudest ovation of the night. Carmen Giannattasio was a febrile, edgy Nedda with thrilling high notes and a perfectly judged sense of line. Benjamin Hulett turned the relatively small role of Beppe into a major one and sang effortlessly, whilst Dionysios Sourbris looked the part as Silvio, although his fast vibrato took some getting used to.

Common to both operas were Aleksandrs Antonenko (Turiddu and Canio), and Dimitri Platanias (Alfio and Tonio). Both have a tendency to over sing, and often their delivery can verge on the stentorian, yet Platanias excelled in both roles, whilst Antonenko sounded far more at ease as Canio than he had done earlier in the evening as Turiddu where his constantly forte singing became tiring after a while.

Minor reservations then on what was a triumphant night for The Royal Opera. Whatever you do, don’t miss the live cinema relay on 10 December.