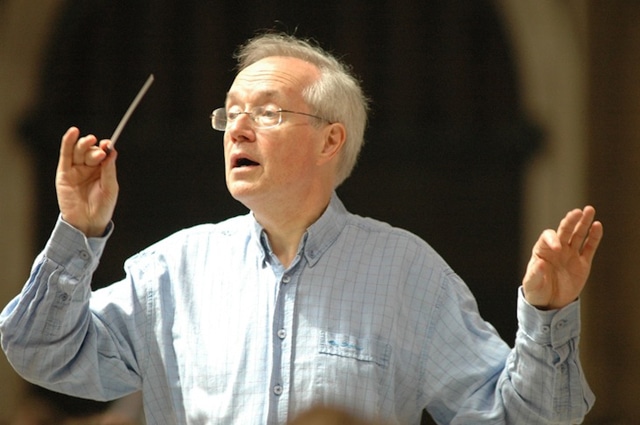 When Passio, Arvo Pärt’s 1982 Latin setting of the Passion story according to the gospel of St John, first arrived in Britain in the mid-1980s, it became popular through a tour around Britain’s cathedrals, in which the deeply devotional aspects of this 70-minute-long piece of ‘Holy Minimalism’ were contextualised by the centuries-old religious art and architecture surrounding the performances. Friday night’s presentation of the work under the direction of Stephen Cleobury at Kings Place was as different as it could possibly be from these performances; the context here was ‘minimalism’ rather than ‘holy’ (it being part of the Minimalism Unwrapped series which placed it in the context of more secular works by the likes of Glass, Riley, Nyman and Reich), and, against expectations, this worked extremely well. The simple cube of the King’s Place Hall 1 added to the austerity of this sparse work, and the electronic organ used did not feel out of place; even the artificial reverb provided by the sound system, felt like a deliberate post-modern gesture, rather than a nod to recreating the acoustic of a cathedral.

As with all minimalist music, the magic was made by the small changes, which became, against the highly structured and static background, immensely significant – an alteration in timbre, or the changes in voice- or instrument-allocation become special. So, the rise to his highest note of the evening by the counter-tenor Evangelist on the words ‘ut crucifigeretur’ brought to mind the hoisting of Christ’s cross to a vertical position, and the rising passage in the organ against Jesus’ descending notes on ‘consummatum est’ suggested the rising of the spirit out of the dying body.

The lion’s share of the performance fell to the four voices of the Evangelist (Maud Millar, David Allsopp, Joel Williams and William Gaunt) and to Endymion, the small instrumental ensemble consisting of a violin, oboe, cello and bassoon (plus an organ that acted as ‘continuo’ or as part of the larger chorus accompaniment). Pärt’s compositional system generates many of the possible combinations of instruments and of voices in solos, pairs, trios or quartets, and all of the performers ensured that each combination was perfectly delivered and had a unique quality; the tenor/bass pairing of the Evangelist quartet was particularly impressive. The work is also scored for two soloists, and these roles were impressively executed by the bass-baritone Edward Grint (Christ) and the tenor Thomas Hobbs (Pilate). The voices complemented each other perfectly – Grint warm and mellifluous, Hobbs bright and edgy – and when they were joined by Joel Williams, the tenor Evangelist, for the trial before Pilate, the variance in timbres created a sublime example of minimalist contrast.

The choir of King’s College Cambridge provided the chorus part from the gallery above the stage. These days, musical fashion has changed, and the King’s choir is not heard as often in performances of large works as it used to be, but their pure sound worked well with the ascetic nature of the piece. They seemed, however, less confident than usual, and some of the chorus lines took a while to settle in. Notably unfortunate was the last choral statement, which, with its sudden shift into a more lush harmonic idiom, provides a transcendent conclusion to the work, but, alas, the voices were not together, and a choir famous for its uniformly placed (even over-emphasised) consonants did not deliver. Apart from this last infelicity, though, the direction of the performance by Cleobury was assured, and he allowed the piece the space and pace it needed to work its hypnotic charm.