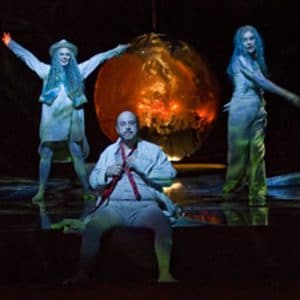 Many disliked Keith Warner’s production of The Ring when it opened, but that three full cycles sold out in four hours must say something about its audience appeal. In this outing, Das Rheingold proves an exhilarating experience: colourful and visually seductive, though not always as slick as it should be. Antonio Pappano‘s transparent conducting provides a solid foundation for the aural performance.

Pappano, typically for him, strives for lucid, chamber-proportioned, even Mozartian orchestral textures. The beat is responsive; tempi are not rushed and never showy. The Prelude’s monumental Eb chord hangs suspended in the auditorium, growing not excitedly but organically, and the work’s four long scenes progress elegantly and endlessly forward.

The Orchestra of the Royal Opera House plays with unclouded technical excellence, phrasing superlatively. The horns’ deft, songlike textures are particularly of note. Though a strong sense of danger – an intense demonstration of how exhilaratingly seductive and violent Wagner’s score is – could be claimed to be missing from certain moments, here is an interpretation crammed with intricate detail and one thoughtfully rendered from start to finish.

Various knobs need to be tighter in Keith Warner’s production. Character direction is at times found to be wanting, and various key relationships – Wotan and Fricka for one – fail to contribute to the drama. But individual characterisation is strong. Will Hartmann and Peter Coleman-Wright are superb as the wimpish fops Froh and Donner; Philip Langridge‘s excellently sung Loge steals the show; Wotan’s confrontation with Alberich in Scene Four is electric. The progression of the Ring from hand to hand is clearly chartered.

It could fairly be suggested that the progression of moving platforms, descending trapdoors and flashes of strobe lighting does little more than demonstrate the Royal Opera House’s technical capabilities. But these are visuals that stick in the cranium – the wavering projected ripples of the Rhine, the black leather, Xanadu-like dwelling of Scenes Two and Four, the sickly torture chamber of Nibelheim (Scene Three is daringly staged as a nightmarish, George A Romero vision of a rotting future), the Godzilla-like dragon looming above Wotan and Loge. Even the ascent to Valhalla, though the staging seems cluttered, is bathed evocatively enough in reds, blues and greens to excite the eye. There’s the odd moment that looks like a superficial, extraneous gesture, but such incidents are incorporated successfully into the overall structure.

John Tomlinson‘s vocal projection is outstanding and his delivery thoughtful, but his nowadays dry, effortful top can inject a certain unwanted vulgarity into Wotan’s lines. It is hard not to regret Bryn Terfel’s selfish last-minute withdrawal from the role: Tomlinson, however excellently he characterises, is past his vocal best in such a part. Jane Henschel, however, proves a rich, fruity Erda and Peter Sidhom a powerful Alberich. The whole could be yet visually tighter, but it is colourful, vibrant and musical enough that any shortcomings may be be confidently forgotten. It bodes well for the coming cycle.