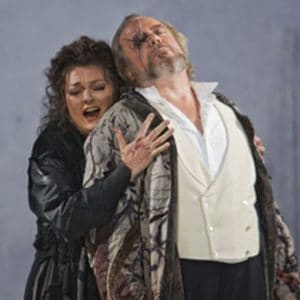 After this production of Die Walküre, a gentleman outside the opera house was heard to claim that the performance had been flawless. I wouldn’t go that far, but this cycle is certainly proving a very pleasant surprise to a large number of people. Act One of Die Walküre, perhaps the most popular section of The Ring, is a visually bright and aurally penetrating experience.

The act can count on two high-octane lovers in the shape of Simon O’Neill (Siegmund) and Eva-Maria Westbroek (Sieglinde). O’Neill’s tenor is more gruff than heroic or traditionally beautiful and his lower register never quite seems healthily produced, but he boasts a dangerous, clarion ring up above that greatly excites the ear; his sustained cries of Walse shoot into the hall like machine gun fire and his projection is tireless. Yet there is no suggestion of ‘can belto’ delivery here: the Winterstürme is sung with lied-like precision, a golden ring creeping into O’Neill’s timbre to mirror the murmuring arrival of spring.

Westbroek is scarcely less good. She perhaps misses some psychological depth (brought so memorably to the role by Lotte Lehmann in the 1935 recording under Bruno Walter), but she matches O’Neill for volume and finds true lustre and ecstasy in her timbre as the duet reaches its peak. The two fall in love with bestial desire, and the sparkling shower of confetti-leaves midway through the act serves as colourful, kitsch counterpoint to the act’s elastic stretch of gritty intensity.

Antonio Pappano provides his own intensity down in the pit. The tempi in Act Two can be daringly slow, but the act’s symphonic, cinematic structure is expertly constructed, its peroration shockingly violent. The Orchestra of the Royal Opera House play with all the detail and transparency that was evident in Das Rheingold, though at this performance, the horns’ intonation was occasionally suspect and Act Three’s twinkling final bars lacked precision. Such issues were not present in the Preview Cycle (which I also attended), and they will undoubtedly be ironed out in the coming cycles.

Keith Warner’s staging is strongest in the third act: the spinning wall thrillingly heralds Wotan’s furious entry, then poignantly separates Brünhilde from her father. The final confrontation is electric, though John Tomlinson, having pushed heroically through Act Two and invested the great monologue with tremendous colouring and shading, was beginning to tire by the end of this performance; his top was unsteady and he once lost coordination with the pit. Lisa Gasteen looks convincing as Brünhilde, and she sings ever more strongly with each performance, though a somewhat acidic quality can still creep into her upper register. The incestuous kiss that the characters share is unpleasant to watch. The Valkyries, however, are uniformly superb and shake the house with their great Act Three ensembles.

The commitment from each performer is great, and the overall effect is of a very fine, if not flawless, performance.