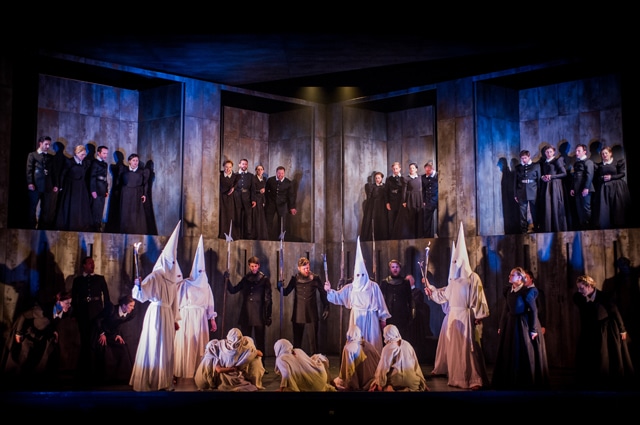 Politics, politics everywhere – when you arrive at the gates of Grange Park, you’re handed a crisply produced foldout promoting next year’s new regime at the Grange, when Michael Chance takes over as Artistic Director, and the evening’s performance is preceded by a talk from the present Chief Executive, the ever-persuasive Wasfi Kani. The programme reminds us of the issues surrounding the departure of Grange Park Opera to West Horsley Place – not rent, but the control of two charities – and Wasfi’s introduction confirmed that the new venture is already looking healthy, with half the needed money already raised (How could it not be? This lady could persuade you to give her your Labrador) and the ground being broken for the ‘Theatre in the Woods’ next week. So we get two companies from one, and seven or eight operas a season spread over two of the most idyllic places on earth. For opera-lovers, it’s all good.

Politics also dominates the stage in Don Carlos, so it was fitting that the strongest performances came from the King, the Grand Inquisitor and the Marquis of Posa. Filippo often steals the show in the same way as Gremin can in Eugene Onegin, but it’s usually because of the sympathy generated by his wonderful aria for a man who, despite being so cruel as to have led his bride to the altar through a procession of human torches, makes us feel for him because he is not loved. In Clive Bayley’s superb characterization and singing, we felt not so much sympathy as awe – even in the more touching phrases of ‘Ella giammai m’amo’ (She has no love for me) we were always aware of the steely yet conflicted tyrant.

You felt it, too, in the tension-filled exchanges with Alastair Miles’ minutely detailed Inquisitor. What a fine singing actor Miles is – from such a moving Pogner at Glyndebourne just a few weeks ago, to this portrait of cruel obduracy. David Stout’s characterization of Posa was less detailed; as with others in the cast, some of his scenes seemed under-directed, but his confidently produced, warm singing did much to compensate. His death scene, well sung though it was, seemed rather low-key for the demise of so heroic a character.

Whereas Posa is what might be called a gift of a role, that of Carlos could well be considered a brute of one, and Stefano Secco did not always have an easy time with his music, especially in ‘Vago sogno m’arrise’ where he was affected by either nervousness or the desire to phrase as though the words were being sung to himself. That’s no bad thing at this moment in the opera; his instincts are the right ones and as the run proceeds his performance should settle down to become more even and more revelatory of what his undoubtedly fine voice can do.

Ruxandra Dunose was a powerful Eboli, suggesting genuine bitterness and remorse at her crucial moments; ‘O don fatale’ was given quite an ovation for its emphatic delivery. Virginia Tola’s Elisabetta was a touching and vulnerable queen, her sweet, limpid voice better suited to the quieter moments of reflection, as when she recalls her childhood in France, than to the more grandiose ‘Tu che le vanità.’  She did not sound in her best voice on this occasion, with some passages rather muted; as with Carlos, Elisabetta’s is likely to be a stronger performance after the first night.

Jihoon Kim’s sonorous bass was heard to splendid advantage as the Ghost of Charles V, and Carrie-Ann Williams made her mark as Tebaldo – definitely one to watch, as is the tenor Philip Clieve as the Royal Herald. The Chorus sang with glorious defiance or cowed fear as required – there are some really promising young voices here. Alberto Sousa was a splendidly arrogant Lerma and Sarah Lambie a touchingly credible Lady-in-Waiting.

Gianluca Marcianò directed the Bournemouth Symphony Orchestra with his customary flair, giving sympathetic guidance to the singers and obtaining warmly phrased playing. The pit was somewhat more emphatic than the stage, given that the production was uneven. There were many fine touches, and Leslie Travers’ design coped brilliantly with the challengingly varied settings, from the King’s gloomy study in which the fire seems to echo the immolations, to the Auto-da-fé where a would-be runaway child is a victim despite her attempt to appeal to the king and queen. The tomb was finely evoked with flickering candles, and the atmosphere of cruel repression was very effectively evoked.

Jo Davies’ production concentrated on the more populous scenes, all very well managed, but some of the more intimate exchanges were in need of sharper focus. We felt this especially in the Posa / Carlos duet and in the final scene of Carlos and Elisabetta, where the sense of impending doom and the feeling of lost friendship and love seemed only sketchy compared to the intensity of some of the opera’s other moments. Nevertheless, this is an evening which makes a powerful impact, most markedly so in the scenes where the politics of power are examined and their consequences revealed.