by Melanie Eskenazi
published: 5 May 2013 in Opera and Classical Reviews
Tweet 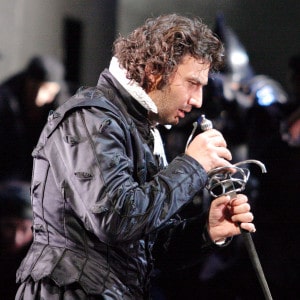 Verdi’s great drama of love and loss, freedom and power, can seldom have given sharper focus to the themes of Schiller’s original, than in this superbly sung, tautly directed production – “You control an Empire, but cannot control yourself” as Posa remarks, and it is these conflicts, between private and public , duty and devotion, which emerge so clearly at Covent Garden.

For this revival of Nicholas Hytner’s 2008 production, the Royal Opera House has assembled an outstanding cast. The title role is one of many which Jonas Kaufmann seems born to sing, and his ideal combination of grandeur and vulnerability bodes well for his future Otello; his soft, lyrical singing is a wonder to hear, and his acting is utterly convincing, whether portraying this troubled character’s neuroses or avowing eternal love and friendship. Ferruccio Furlanetto gave an equally persuasive portrayal of the King, the great aria ‘Ella giammai m’ amo’ (She has no love for me) almost making you feel empathy for a man whose cruelties included the use of human torches to light his wedding procession.

Mariusz Kwiecień has a slightly more robust baritone than Simon Keenlyside, who sang the Marquis of Posa last time, so the great duet ‘Dio, che nell’alma infondere’ had even more impact, and he was a warmly sympathetic Rodrigo, especially in his death scene. The production does not allow the Grand Inquisitor to be as terrifying as one might wish, but Eric Halfvarson did his best to delineate the beliefs of the evil old torturer despite battling a chest infection. Robert Lloyd was a suitably sonorous Carlos V; during an interval, someone was heard to ask “What’s the Commendatore doing there?”

Anja Harteros is a majestic Elizabeth, singing with rich tone and steely command, especially in ‘Tu che le vanità’ although one might want more of a sense of womanly passion at times. Béatrice Uria-Monzon had stepped in to take the role of Eboli after Christine Rice had fallen ill, so it would probably be unfair to judge her ‘O don fatale’ from this at times uncertain performance, although she was touching in her remorse towards the Queen. The chorus sang superbly, and the orchestra under Antonio Pappano showed once more that it is in the top division when it comes to playing Verdi’s music.

The production is clear-cut, narratively direct, grandiose or intimate as required, and although it’s rather ‘stagey’ at times, Hytner’s vision (revived by Paul Higgins) is true to both music and drama. The final scene between Carlos and Elizabeth will surely linger long in the memory of all who were fortunate to see and hear it, Kaufmann’s ‘Vago sogno m’arrise’ sung as though to himself yet striking right at the heart, and the final farewell between the unhappy pair lacerating in its intensity.