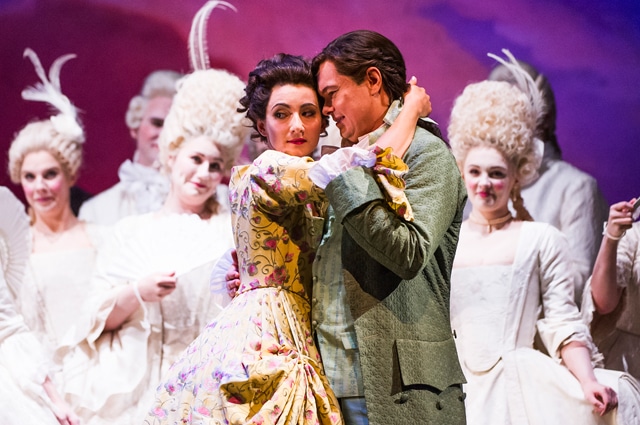 The 2015 Glyndebourne Tour begins with this stylish, elegant production of the 64th of Donizetti’s 66 operas: written in just over two weeks, the work is mostly frothy fun but with a slightly darker side in Mariame Clément’s staging, here capably revived by Paul Higgins. Julia Hansen’s delicate designs, the superb chorus and the exceptionally fine playing of the Tour Orchestra under Duncan Ward are the chief delights.

After a positively fizzing overture, we are introduced to a set which makes skilful use of the revolve, with Norina and Don Pasquale each inhabiting their own little sphere whilst Malatesta moves between them, if not quite with Tarquin’s ravishing strides, stealthily and with some degree of menace. The American baritone John Brancy has an impressive CV, with many prestigious competition prizes and his confidence and winning stage presence were ideal for Malatesta, as was his forthright, easily produced baritone. Tuomas Katajala’s Ernesto was another Glyndebourne debutant, with a sweet, plaintive if light tenor voice.

Adding to the international trio of house debutants was the Portuguese baritone José Fardilha, whose Don Pasquale was firmly on the lovable rather than boorish side; there were times when some of his words were a little muffled, but as the run proceeds he will surely become even more engaging in the part. He and Brancy received deservedly enthusiastic applause for their patter duet. 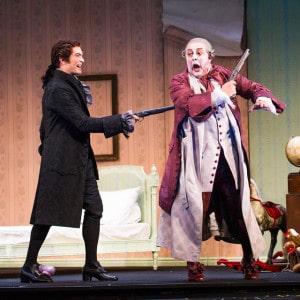 Eliana Pretorian was a feisty, sharp-witted Norina; her voice is less vibrant and her personality less flamboyant than that of Danielle de Niese, who sang the role for the 2013 Festival, but her rather pert interpretation suited the director’s concept well. The most remarkable singing came from the chorus – nothing new there, but it’s still worth remarking on the consistency with which Jeremy Bines obtains the finest ensemble work from this group of mostly young singers. They clearly relished the director’s view of them as alternately foppish and sympathetic onlookers.

Duncan Ward won the BBC Young Composer award ten years ago and has since had a varied career as a conductor; if tonight’s showing was anything to go by, that career is about to become even busier. Ward definitely merits the description of ‘singers’ conductor’ in that he allows his cast time to shape their phrases, but he also possesses ideally firm control over the orchestra, who played marvellously for him.

The production is not in any way shocking yet it asks some questions about the relationships between the characters, especially Norina and Malatesta, and the designs, whether evoking the dreariness of Don Pasquale’s house or the roseate glow of the April evening in the garden, are a constant pleasure to see. This is not one of Donizetti’s finest, but it contains some delightful arias and choruses, and in many ways it’s just as good an introduction to the pleasures of opera as much greater works such as The Marriage of Figaro. There are sixteen more performances of Don Pasquale from now until December 4th, at venues from Glyndebourne itself to Plymouth and Norwich.