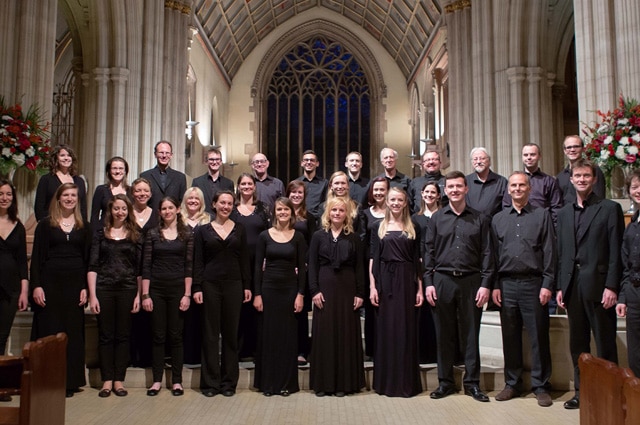 Christmas is definitely a time for choral music, and concert halls are awash with Christmas Spectaculars – presented more for a seasonal feel than necessarily for their musical interest, thus making reviews seemingly redundant; one or two concerts, however, stand out as having more nuanced selling points, and are worth a review. For their seasonal offering on Tuesday evening, The Holst Singers – under the combined direction of Michael Collins and Jeremy Cole – opted for a mixed bag of pieces picking up the theme of their performances earlier in the year by Vaughan Williams and the English pastoralists entitled ‘An English Folk Christmas’, for which they were joined by members of the London Sinfonia and the baritone Derek Welton.

Vaughan Williams himself was represented by his Fantasia on Christmas Carols for baritone solo, choir and orchestra, which was given a first-rate performance, showcasing Derek Welton’s magnificently resonant voice, and demonstrating the choir’s excellent understanding of the nuances of dynamic and blend.

Welton also opened the concert, his commanding tones perfect for the watchman’s cry of Past Three o’clock in the arrangement of the carol by Charles Wood; his subsequent rendering of The truth sent from above in an arrangement for solo voice and harp was also a joy to listen to.

Another lengthy item on the programme was A Garland of Carols, Anthony Bolton’s 2006 homage to Britten’s A Ceremony of Carols. Also set for upper voices and harp, this three-movement piece is a delight, and was given a creditable performance by the sopranos and altos of the choir. The last movement – a setting of Tomorrow shall be my dancing day in which angular one- or two-part verses are contrasted with lush four-part choruses – was especially attractive.

Shorter choral items included more ‘folky’ carols in various modern arrangements (many of the texts collected by Cecil Sharp or Vaughan Williams) – Sussex Carol; Shropshire Carol; Gallery Carol; Boar’s Head Carol – and they were given the kind of precise and subtle performance that is always expected from The Holst Singers; their account of Peter Warlock’s exquisitely moving Bethlehem Down was also superlatively controlled. And with that precision came the only musical niggle of the evening: it was perhaps a little too polite, a little too academic. Somehow an ‘English Folk Christmas’ felt as though it needed to contain a few rough edges: not an elegant string orchestra playing the far-too-high-art Pifa from Messiah, but a collection of odd village instruments with perhaps a serpent or an ophicleide parping away at the back, and some simpler gallery-choir harmonies.

Complementing the carols was an odd selection of texts read by David Haig, who is an excellent comic actor, and his delivery of John Julius Norwich’s The Twelve Days of Christmas was spot-on, as was his reading of The Cratchits’ Christmas Lunch from A Christmas Carol (although this should have been cut to half its length). But the inclusion of the 15th-century Adam lay ybounden (which, if it is to be read, really needs a full-on Middle-English pronunciation) was perhaps not the best programming decision.