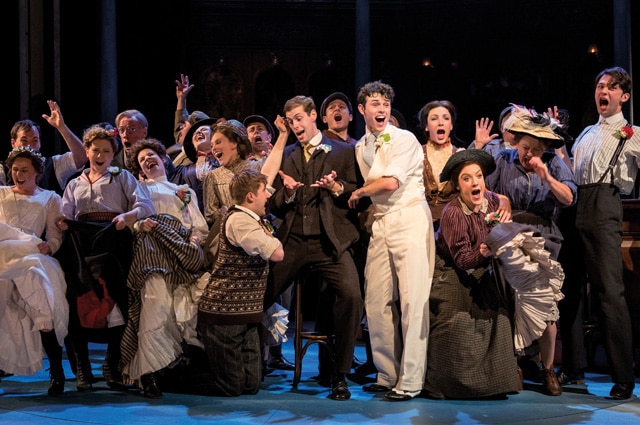 In the past few years, one good way of ascertaining if a new West End musical is worth seeing is to ask if the production first appeared at the Chichester Festival. This does not mean that if the answer is ‘no’ it should automatically be bypassed, but a reply in the affirmative does put a stamp of quality on the evening. The Savoy Theatre’s recent hits Gypsy and Guys and Dolls both started life in West Sussex, and so too did Half A Sixpence, which has just come to the Noël Coward Theatre.

The musical feels surprisingly relevant to us today in the light of recent events. Originally written in 1963, it explores class and privilege at the beginning of the twentieth century, but from the perspective of a time when traditional ideas about them were being comprehensively challenged. However, with the recent conclusion of a presidential election in which only those who had, or could raise, vast quantities of money ever stood a chance of being elected to the highest office, the dilemmas explored by the workers at Shalford’s store feel as relevant as ever. As each dreams of wealth, and considers whether they would join the upper echelons of society and perpetuate inequality, use their money and influence to lead a revolution, or simply make themselves happy by fulfilling a few modest ambitions, we are presented with a range of still relevant questions concerning wealth, happiness and responsibility.

Much of the credit for making the show work so well for us today must go to Julian Fellowes who for this production has extensively adapted Beverley Cross’ original book. George Stiles and Anthony Drewe have also developed David Heneker’s score and added some new numbers that work brilliantly alongside such classics as ‘If the Rain’s Got to Fall’ and ‘Flash, Bang, Wallop’ (which is relocated to the end of the show). The result is that, even if Half A Sixpence is ultimately a simple, heart warming rags to riches story, it is still possible to feel uncomfortable at the ways in which Arthur is mocked for not knowing how to ‘behave’ or Ann is looked down on as a maid. Nevertheless, it is no less important to take heart from one line in ‘Pick Out a Simple Tune’, one of Stiles and Drewe’s excellent additions, that music can unite us all. 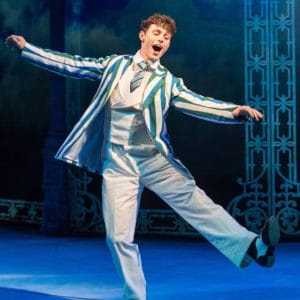 Rachel Kavanaugh’s staging (with Paul Brown as the production designer) is exceptionally clever as a small central circle, through which doors frequently rise, is surrounded by four rings that can turn independently. This proves an excellent device for smoothly driving the action forward, introducing an extra layer of dynamism and (when they rotate in opposite directions) multiplying out the variation revealed in different performers’ movements. A row of ornate steel columns sometimes appears on the outer ring as it rotates, which provides an all-purpose framing device that automatically hints at bandstands or seaside promenades. The columns (although not occupying the front of the stage at the time) prove equally adept at creating the right ambience for a turn of the twentieth century clothes store, a posh house or a working man’s pub.

Screens often appear at the back of the stage upon which images appear, including one of sixteenth century Burghley House when in ‘We’ll Build a Palace’ Mrs Walsingham and others imagine the abode that Arthur’s money will provide. These sometimes roll back revealing the props required for the next scene, which then slickly move into place in a second by travelling on the rotating rings. As furniture items rotate they create aesthetically pleasing patterns as, when viewed altogether, they move in and out of various formations.

In what is undoubtedly a slick production, Andrew Wright’s choreography proves to be particularly polished. Every gesture and movement, such as jumping onto a bar, is precisely planned, and it is impressive to see the cast achieve such slickness and dynamism while looking as if they are merely indulging in a few tumbles and japes. Although the choreography clearly has a style of its own, variety is introduced to delineate the upper class characters who end ‘Pick Out a Simple Tune’ by playing Lady Punnet’s best silver and quite literally swinging from the chandeliers, and Arthur’s down-to-earth friends who in ‘Flash, Bang, Wallop’ create the type of all-singing, all-dancing extravaganza that one just doesn’t want to end. The flexibility of the cast is also proved by the fact that it is more less the same people performing the two numbers, while there are also a host of subtle touches. During the duet ‘The One Who’s Run Away’, Charlie Stemp’s Arthur suddenly does a more extravagant movement than Ian Bartholomew’s Chitterlow. This not only provides variation and shows off Stemp’s skills, but ensures that Arthur moves in a second from being in front of Chitterlow to being behind him for their next step together. Detail is also revealed in other ways so that the shallowness of Lady Punnet’s music evening is shown simply by having the flautist wear gloves as she plays.

Charlie Stemp is brilliant as Arthur Kipps as he reveals superlative singing, acting and dancing skills alongside the requisite style and look for the part. His biography in the programme is far shorter than almost anyone else’s but one can picture him standing out as Eddie in Mamma Mia! or from the ensemble of Wicked to such a point that his talents were instantly recognised. Stemp stands, however, as the first among equals in an incredibly strong cast where Emma Williams as Helen Walsingham, Devon-Elise Johnson as Ann, Ian Bartholomew as Chitterlow and Bethany Huckle as Flo all leave great impressions. Graham Hurman conducts the orchestra, which is positioned at the back of the stage out of sight of the audience, extremely well, and the result is a show that could be recommended to anyone of any age who is in search of some good quality fun.