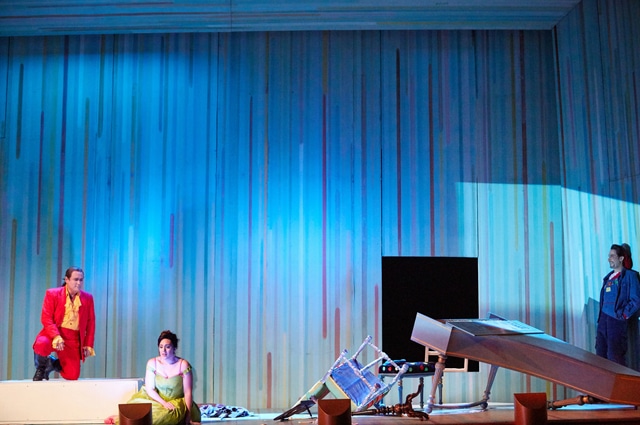 Following Glyndebourne Festival Opera’s new production of Il barbiere di Siviglia, in which comedy and dynamism were striven for at every turn, it feels refreshing to become reacquainted with Moshe Leiser and Patrice Caurier’s 2005 production for the Royal Opera House. Overall it feels just as comical and surreal, but it achieves the same basic effect by applying a greater level of restraint.

Christian Fenouillat’s set consists of a free standing box-like area, which creates a stage within a stage. The shenanigans that occur in the opera make it appropriate to emphasise the notion of performance when presenting it, and the effect is enhanced by placing footlights in front of this second smaller stage and having the principals bow even as they sing their final notes. With the side walls running at angles, the performance space draws the eye in and is lined with colourful Bridget Riley-esque wallpaper.

In Act I hardly anything stands in the area, with even doors and windows only appearing in the walls when they are needed, and this is where the staging’s cleverness lies. By restricting the size of the performance area, two or three principals can easily dominate the space, but by removing the back wall when the musicians, soldiers or police appear, a sense of mass activity can be created within a few seconds. At the end of Act I the entire set rises and tips from side to side. It is not only amusing to see the whole cast tumble about, but raising the performance area just a few feet offers the audience a remarkably different perspective on the action and characters.

This production always seems to have been blessed with strong casts, even though they have been fairly different for each revival. The 2009 one featured the ‘dream team’ of Joyce DiDonato (who broke her right fibula during opening night but carried on), Juan Diego Flórez, Alessandro Corbelli and Ferruccio Furlanetto and ended up on DVD, while 2011’s cast included Levente Molnár, Aleksandra Kurzak and John Osborn. Many of the principals in 2014 were making Royal Opera debuts, and together they created a very strong revival. That is also the case this time around although, while the end product is of a similar standard, it is very different in style. This production has always included Almaviva’s final aria ‘Cessa di più resistere’, which is cut from most performances, but it appears as if revival director Thomas Guthrie has included even more music than he did two years ago. 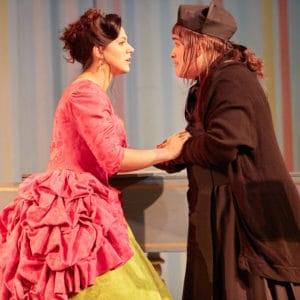 It may be this greater length that provides more scope for the hierarchies inherent in the plot to be tapped into, and the performers certainly succeed in bringing them out. The best Almavivas are those who hint at the arrogance that lies beneath the romantic exterior, which then comes out in the second Beaumarchais story that we know best as Le nozze di Figaro. It is good therefore that Javier Camarena, making his Royal Opera debt, really hints at his darker nature, not only towards the end as many performers do, but throughout the evening. His performance of ‘Ecco ridente in cielo’ may not be perfect, but in this production every singer other than Flórez has struggled a little with it, as it comes so early before the voice has had time to warm up. Even at this point, however, we become acutely aware of Almaviva’s sense of self-importance through the way in which he proclaims that Rosina will be his, while the inclusion of Fiorello’s recitative between scenes one and two (this was also retained at Glyndebourne) really emphasises just how little he cares for others.

Camarena’s voice possesses a little more heft than many singers in the role, which is all to the good, and this also helps him to assert character. The robustness of his voice also shines through in his good performance of ‘Cessa di più resistere’, and if by the same token his coloratura does not have the greatest etherealness about it, the strength he displays is what matters most in this fiendishly difficult aria. One also senses that the petty bullying of which he accuses Doctor Bartolo is about to be replaced by his own far more sinister variety. At the end, when during the final notes all of the principals adopt stock ‘curtain call’ gestures, he does so a second after everyone else as if any rules regarding conforming or ‘falling into line’ do not apply to him.

Daniela Mack, making her Royal Opera debut as Rosina, also comes across as a strong character so that in ‘Una voce poco fa’ we become aware that she is just as certain as Almaviva is (the other way around) that he will be hers. She produces a rich and relatively forthright sound that proves perfectly suited to revealing her ability to think in terms of ‘all out war’ when crossed. This makes it all the more saddening when we think that this feisty, vivacious character is totally broken by the Count in Figaro. José Fardilha, also making his Royal Opera debut, is a slightly softer, sweeter Doctor Bartolo than most. It may only be by a degree or two, but it ensures that ‘A un dottor della mia sorte’ is very effective. Occasionally, he looks even kindly as he implies that Rosina is simply a young girl who is susceptible to going astray and to not understanding his importance, and this contrasts brilliantly with Mack’s own expressions that reveal just how little regard she has for him.

Vito Priante is excellent as Figaro, having played Escamillo here last October. He works his way through the auditorium at the start of ‘Largo al factotum’, having fun as he trips over half of the front row, before thoroughly commanding the stage with the aria. His voice is strong and smooth, and he has the persona to project the loveable rogue who always manages to be in the right place at the right time. Ferruccio Furlanetto, who was also in the 2009 ‘dream cast’, is brilliant as Don Basilio. Not only are we treated to a world class bass voice, but also a superb portrayal of the music teacher as he towers over Bartolo, often forming menacing diagonals with his body. In his ode to calumny, we feel that he is not particularly worried about actually convincing Bartolo that slander is the way forward (because he already knows he is the more dominant of the pair), but instead is simply getting high on his own thoughts and sense of power. Madeleine Pierard is an excellent Berta, providing an expressive performance of ‘Il vecchiotto cerca moglie’ as she really gives the impression of taking the opportunity to vent her thoughts (and have a swig from a bottle) in the few moments that she can get to herself. In the pit, Henrik Nánási finds an affinity with Rossini’s score, applying texture and detail to its mesmerising beauty and bubbly charm.