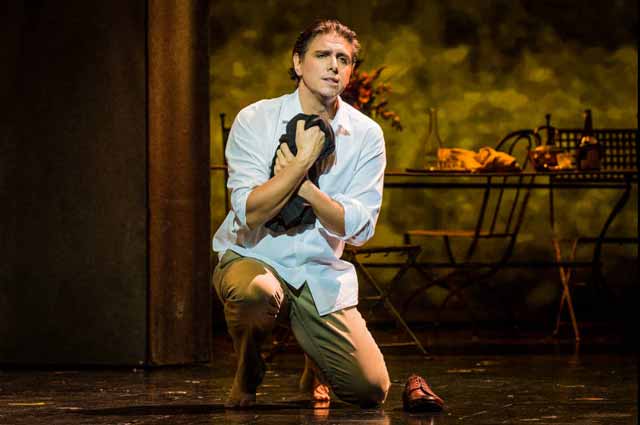 Tom Cairns’ simple, direct production of Verdi’s best-loved work, here revived by James Hurley, makes the perfect introduction to opera – paired with Massenet’s Cendrillon for this year’s Tour, you have the ideal combination of the sombre and the sparkling.

Christoph Altsteadt made a striking debut in the 2015 Glyndebourne Tour production of Die Entführung aus dem Serail, and he lived up to the promise shown then with his authoritative but never dictatorial conducting of the Tour Orchestra, which seems to get better every year. This was not a grandiose reading of the score – obviously, the big set scenes need, and got, plenty of pzazz but it was the more tender moments which showed the orchestra at its best; ‘Parigi o cara’ for example was so subtly phrased and finely articulated by the players that you felt that it was the first time you had really experienced this loved duet to the full.

Mané Galoyan’s Violetta was, appropriately, the star of the show, with some audience members declaring that she was the best they had heard in the role. This Glyndebourne debutant is not the aspirant ‘grande dame’ of a Georghiou or a Fleming but she fits the production’s concept perfectly – a fragile, vulnerable figure, not ultimately tragic but encompassing the doubts and fears of someone in deepest torment. Hers is a genuinely lovely voice, used with taste and musicality, well up to the demands of ‘Sempre Libera’ but shown at its best in more reflective moments, and her demise was sufficiently touching to bring tears to the eyes of many in the audience.

Emanuele D’Aguanno’s natural Italian inflection falls gracefully upon the ear, and his lyrical tenor is pleasing except in forte. He’s a slightly awkward actor, and seemed a little under-rehearsed on this occasion. His father was stolidly sung and played by Noel Bouley, the aria sung with musicality but somewhat under-characterized. The ever-reliable Nicolas Folwell impressed as the Baron, and Emma Kerr – from the Glyndebourne chorus – was a striking Flora.

Claire Barnett-Jones has a lovely, sympathetic face and manner, so she was ideal casting as Annina, and John Mackenzie-Lavansch, another soloist from the Chorus, was a debonair Marchese. The Glyndebourne Chorus, as ever, sang superbly (why no bow?) and Peter Mumford’s lighting cast a tremulous glow over Violetta’s life and person. The dancers in the ‘Gypsy’ scene were effectively choreographed by Aletta Collins, and Hildegard Bechtler’s costume designs reflected the feel of almost-present day Paris.

The production is perhaps too spare for some, with not much in the way of sets beyond walls and chairs, suggesting perhaps the emptiness of this society, but one would have liked to see a more effective depiction of the lovers’ rustic idyll and Violetta’s chamber. The ending is ‘different,’ which enthrals some and leaves others feeling short-changed, but then that’s what a good production tends to do. It would be worth going just for the Violetta and the orchestra, but the production as a whole makes an impact through its directness and forthright presentation of heightened emotions.