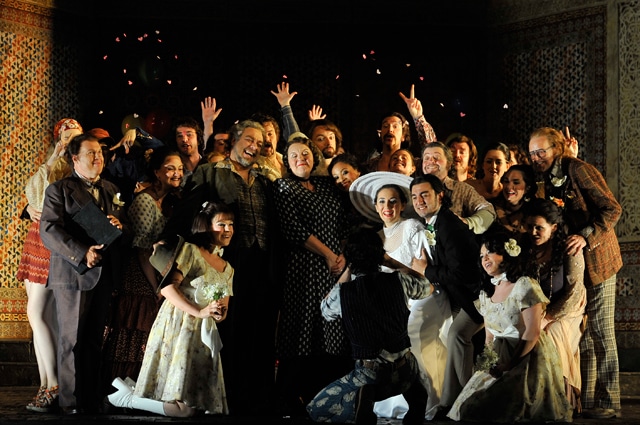 Michael Grandage’s 2012 production, here crisply revived by Ian Rutherford, left us less than entranced on its first outing, was much sharper the second time around, and now provides the kind of evidence needed to retain Glyndebourne’s place as the house for Mozart. The period is still vague, the set still looks as though it has wandered in from Die Entführung, the Count and Countess still resemble Disco Stu and Beverly from Abigail’s Party more than they do a Spanish grandee and his high-born wife, but the comedy is more defined and the sublime moments are as moving as ever.

The casting is much more even this time, with none of the principals upstaged by the minor characters, although John Graham Hall came pretty close with his Eric Idle on speed Don Basilio, superbly sung as always with this artist.

The director had not spared the Countess the requirement to flit up and down stairs in those vertiginous heels, but Golda Schultz, making her house debut, negotiated all that was asked of her with aplomb, and sang with serene command of even her most difficult music, sometimes recalling Kiri te Kanawa in her combination of plaintive emotion and silvery tone. Her ‘skirt chaser’ husband was played with relish and sung with confidence by Gyula Orendt, who had impressed in the 2014 La finta giardiniera; his tone tended towards the dry on occasion, but his aria was boldly done.

Rosa Feola was making her Festival debut in the role of Susanna, having sung Sandrina in La finta giardiniera on the Tour, and it was an auspicious one for this charming, true ensemble soprano who produced unfailingly sweet tone and elegant phrasing. Her Figaro was another Italian Festival debutant, Davide Luciano, whose very light baritone could at times have been more incisive although he sang his arias with fluent style. 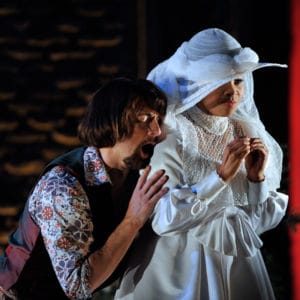 Natalia Kawalek as Cherubino, replacing Serena Malfi who had withdrawn through illness, seemed to have imported her own conception of a love-obsessed teen, at times a little too pointedly, but she sang with the required ardour. Susan Bickley made for an unusually sympathetic Marcellina, singing with her characteristic burnished tone, and Carlo Lepore was a positively avuncular Bartolo, his voice a distinguished bass used with subtlety.

Nicholas Folwell brought years of comic experience to the part of Antonio, and Alasdair Elliott made a strong impression as Don Curzio, mercifully spared a stutter. Nikola Hillebrand showed much promise as Barbarina, as did Julia Hamon and Alison Langer, both from the Glyndebourne Chorus. The Chorus sang with its customary verve and freshness even when asked to jive about in a sort of parody of the Twist.

Ashok Gupta and Jonathan Manson provided witty Fortepiano and ‘cello continuo respectively, and the Orchestra of the Age of Enlightenment played stylishly for Jonathan Cohen, the wind instruments being especially fine.

The tiny daughter of the evening’s Cherubino was a much better behaved audience member than certain boors who noisily bellowed at regular intervals, and at the end chose to broadcast the opinion that “Mozart is supposed to be one of the greatest composers, but he didn’t know how to end an opera – the first half was great, but all that last bit was just boring.” Fortunately the rest of the audience took a quite different view, with many moist eyed at the sublime ‘forgiveness’ music.