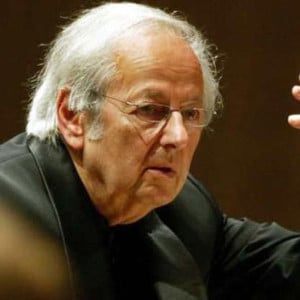 There was a rather special atmosphere in the Barbican for this sold out concert featuring the London Symphony Orchestra’s conductor Laureate, André Previn, the audience rapturous as the frail 85 year old conductor arrived on the stage and was helped to the podium by his former wife, the violinist Anne-Sophie Mutter.

The concert opened with a performance of Previn’s Violin Concerto (‘Anne-Sophie’), just one of many works to have emerged from an intensely productive period of composition over the last couple of decades. Written especially for tonight’s soloist, the concerto was premiered in 2002, the year of her marriage to Previn. Although the couple subsequently divorced, Mutter continues to work with Previn on a regular basis, and it was interesting to see that her performance of the piece was given entirely from memory.

Stylistically, the concerto reflects both Previn’s early years working in Hollywood as an arranger of film scores as well as his advocacy of composers such as Korngold, Prokofiev and Vaughan Williams. Melodically attractive and ravishingly scored, the concerto’s musical argument is perhaps rather discursive, but it communicates a compelling depth of expression, particularly in the slow movement. Mutter’s exceptional technique and tonal refinement were deployed to the full in this performance, matched by dedicated playing of the orchestra under the composer. A brief encore followed in the form of an arrangement for violin and orchestra of a movement from Previn’s 1997 work Tango Song and Dance for violin and piano.

Previn has long been a champion of Rachmaninov’s Second Symphony, his 1973 recording being one of the first to eliminate the cuts in the music that were hitherto customary. From the outset, this was an interpretation of superb control and deep currents. With the exposition repeat in the first movement not included, the performance soon reached an impressive degree of emotional intensity, the impassioned playing of the orchestral players contrasting with Previn’s clear and steady conducting technique.

After the vigorous and clear textured performance of the Scherzo, Andrew Marriner’s interpretation of the clarinet solo in the Adagio came across as slightly introverted, but the movement as a whole flowed with a seamless arc that was very affecting. Best of all was the fervent account of the symphony’s finale, the surging Russian passion of Rachmaninov’s inspiration brought to life by an orchestra performing at the top of its game under an admired conductor. It was thrilling to hear.