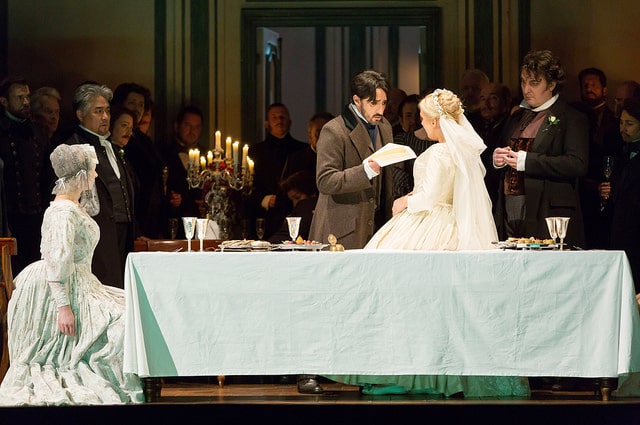 Musically, Katie Mitchell’s new production of Lucia di Lammermoor sees the Royal Opera at something approaching its very best. It is not just Diana Damrau in the title role who dazzles, although she very much stands as the first among equals. Her soprano is clean and precise so that her soaring lines pierce our hearts, while never feeling extravagant or overblown, and her pianissimo passages penetrate the air with a haunting clarity. Alongside her Charles Castronovo gives a very fine performance as Edgardo with his romantic tenor instrument being possessed of sufficient weight to create a full and expansive sound.

As Enrico, Ludovic Tézier asserts a firm yet nuanced baritone, Peter Hoare and Rachael Lloyd are luxury casting as Normanno and Alisa respectively, while Taylor Stayton makes a highly pleasing Royal Opera debut as Arturo Bucklaw. Kwangchul Youn is exceptional as Raimondo as his bass has both the strength and integrity to produce a remarkable sound, while conductor Daniel Oren shapes the score very well, capturing its haunting and mystical elements. His pacing is also strong, enabling the music to breathe with no sense of haste, and yet never allowing things to languish to an unpalatable degree.

In direct contrast, the production is somewhat problematic. It is far from terrible, and undeserving of the boos directed at the production team on opening night, but I would almost have preferred it if it had been. Had the disparity between singing and direction been so great I may have been able to shut the latter out mentally and concentrate on the former. As it is, there are a number of clever ideas, but the consequence is that those elements that are excessively intrusive present a fairly constant stream of niggling distractions across the evening.

Although Lucia di Lammermoor does not require the same degree of specificity regarding time and place as Tosca, it needs to be set against the backdrop of Presbyterianism. Therefore, although Mitchell does not adhere to the original early eighteenth century setting (the opera references the recent death of William III which occurred in 1702), the context still feels ‘Scottish’ enough to work. Vicki Mortimer’s sets, which include a bathroom complete with running water, seem to cross a variety of eras, but generally centre around the time at which Sir Walter Scott wrote his novel in 1819. Mitchell writes in some extra details, so that we realise within the first few seconds of Act II that the events of Act I have led to Lucia becoming pregnant. This strand of thought is then followed through as the blood on Arturo’s murdered body is subsequently mirrored on Lucia’s own, showing how she has miscarried and providing a further reason as to why she should descend into madness and have no will to live. 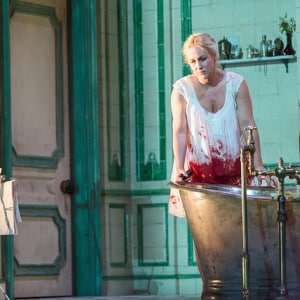 Overall, however, there is too much detail, proving immensely distracting. For every scene two sets stand alongside each other with the central action occurring on one of them, and the other revealing what is happening simultaneously elsewhere. This creates many problems, including the fact that anyone sitting towards the sides of the auditorium has sections of the stage obscured from their sight by the presence of a central partition. The impact of the primary action is marred by having it squeezed into such a tiny area, and during the signing of the marriage contract the chorus practically stand still for the entire scene as there is no room for them to move.

The secondary action on the adjacent set is not only distracting but paradoxically undermines the significance of several events that normally occur offstage by having them spelled out for us. A related issue is that two ghosts, the girl that Edgardo’s ancestor murdered and Lucia’s mother, frequently grace the stage. When, however, Lucia’s words, notes and emotions reveal the ghosts she feels around her it feels childish and unnecessary to present them to us, and although they move slowly and silently they still prove incredibly distracting. At so many key moments of climax or revelation our attention is shifted away from the music designed to capture these towards the physical presence of one of these figures. In the same way, despite Damrau putting in a stunning performance, the impact of the ‘mad scene’ is still blunted by asking us at times to gaze on her, Edgardo, the ghost of the girl and the ghost of her mother, when we wish to do nothing other than focus on Lucia.

Act I’s ‘Quando rapito in estasi’ is sung with Lucia and Edgardo partially undressing and indulging in sexual intercourse. The act is actually rendered very tamely, but the insertion of clear actions in order to play this out does not make the emotions of the two characters flow naturally. The consequence is that the event feels rather comical and, instead of intensifying the passions that exist between them, it trivialises them. At the end of the scene the ghost of the girl is placed between Lucia and Edgardo which makes sense symbolically, revealing the barriers to their love ever being, but not dramatically as it destroys the chemistry between the pair at this moment.

In Act III as Enrico challenges Edgardo to a duel, we actually see Lucia murdering Arturo on the second set. It is clever in the sense that she is apparently tying him up as a part of their wedding night ‘games’ before turning everything around, but the act is carried out in such a way that at times it elicits laughter from the audience. Following the controversy surrounding Guillaume Tell last year, the Royal Opera was keen to stress that this production ‘includes scenes featuring sex and violence’ but the truth is that these actually come across as rather comical, which I am sure was not the intended effect.

Nevertheless, the staging is problematic rather than disastrous, and with the standard of singing being so high, a trip to the Royal Opera House is to be recommended. For those who cannot make it to London, the live cinema screening on 25 April is another option, and, with the cameras able to zoom in on various activities, this could even help the audience to focus on what is important, free from all distractions.

Lucia di Lammermoor will be broadcast live to selected cinemas in the UK and worldwide from 7.15pm on 25 April, while some cinemas will also show encore screenings over subsequent days. For details of participating venues visit the Royal Opera House Live Cinema Season website. The opera will also be broadcast on BBC Radio 3 at 6.30pm on 14 May.

The four performances in May feature a different cast led by Aleksandra Kurzak as Lucia. For further details visit the Royal Opera House website.