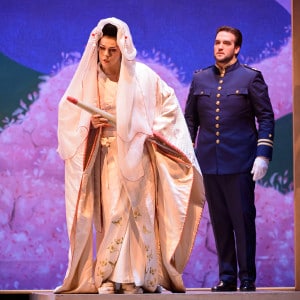 Few of us present on that June night in 2011 will forget Latvian soprano Kristine Opolais’ sensational house debut in the title role in Puccini’s tear-jerker, having stepped in to replace an ailing Patricia Racette at relatively short notice. With Opolais’ husband Andris Nelsons in the pit, the evening rightly entered the annals of Covent Garden history, with Opolais going on to win the ‘Best Achievement in a Leading Role’ in that year’s WhatsOnStage Opera Poll.

Returning to the role four years later, Opolais had a lot to live up to, but if anything her interpretation was even more accomplished. That such a tall, beautiful, blonde woman can subdue and bend her physical appearance to create a plausible, young Japanese girl is truly remarkable. She honed her tone down to a whisper in her exchanges with Sharpless and Pinkerton in Act One, only revealing what her thrilling spinto voice is capable of in the concluding love duet.

Delivering a heartfelt yet never ostentatious ‘Un bel di…’, her voice blossomed, and her gradual realisation that Pinkerton was not going to return was painful to watch. To say that she inhabited the role of Cio-Cio-San is an understatement; she lives and breathes every single note as if her life depended on it, and she is the reigning Madama Butterfly of the day – I can’t think of another soprano who comes close.

Given her prodigious talent it’s a shame that The Royal Opera wheeled out the feeble Caurier/Leiser staging that was well and truly past its sell-by date four years ago, rather than showcasing her definitive performance in a new one. With Christian Fenouillat’s IKEA-inspired designs, and Christophe Forey’s unimaginative lighting plot, there’s little to engage the eye or brain, and asking Opolais to replicate a butterfly in its death throes at the close was naff in the extreme, and came close to parody.

She had excellent support in the pit from Nicola Luisotti, who knows exactly how Puccini’s score should go, and he was rewarded with sumptuous playing from the orchestra,alive to every nuance of the score.

The supporting cast was stronger this time, with the young, handsome American tenor Brian Jagde making an auspicious house debut as Pinkerton. His voice is powerful and even throughout the range, he produced some thrilling singing where necessary and cut an unusually sympathetic figure on stage in what is a pretty thankless role. I hope we hear a lot more of him. Gabriele Viviani was a vivid presence as Sharpless, although his tendency to push the voice caused a few blemishes here and there. Enkelejda Shkosa was a thoroughly believable, all too knowing Suzuki.

A triumph then for Kristine Opolais, the rest of the cast and a strong musical performance; but they all deserved better than this bargain-basement staging.