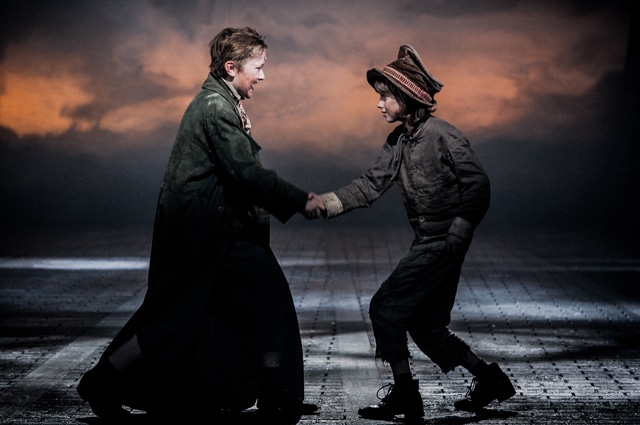 For the second year running Grange Park Opera has included a musical in its summer season, with Lionel Bart’s Oliver! following hot on the heels of Fiddler on the Roof. Whilst Jean-Pierre Van der Spuy’s production does not repeat what was achieved with Fiddler in seamlessly combining the best features of opera and musical theatre, a number of compensatory factors ensure that there is still a tremendous amount to enjoy.

One of the delights of Fiddler was seeing a professional piece of musical theatre being presented in a venue small enough to ensure that no amplification was necessary. Given the number of child soloists in Oliver!, and the way in which the auditorium is used for sections of the performance, it is understandable that microphones are necessary, but it does remove one of last year’s unique selling points. Similarly, while seeing the singers come from two different traditions generally produces dividends, a greater unity of style within certain pairings might be welcome. For example, Jeffrey Lloyd-Roberts as Mr Bumble and Sophie-Louise Dann as Widow Corney both prove excellent singers and actors but as they sing ‘Oliver!’ his operatic voice does not blend with one grounded in musical theatre, and it might have worked better if both had come from one or other of the traditions.

Richard Kent’s set sees a series of frames depicting brick walls stand one behind the other, with various free-standing sets sliding into place to depict the undertaker’s establishment and Fagin’s den. The space is used reasonably well, but often proves better at depicting pandemonium than at delineating movement and actions. The chase around the workhouse to catch Oliver is reasonably effective, but many of the big numbers suffer from choreography which gives the impression that much is happening without leading the eye towards certain details, so that everything feels just a little muddled. Conversely, the scene at the undertaker’s, which involves far fewer characters, seems slightly too tame. It features strong performances from Gareth Snook and Gemma Morsley as Mr and Mrs Sowerberry, but the routine in which Oliver stamps on Mr Bumble’s foot and pushes Mrs Sowerberry into the coffin falls a little flat.

The stars of Act I are undoubtedly the youngsters. There is a pleasing symmetry to the way in which they initially enter through the auditorium to sing ‘Food, Glorious Food’ as the workhouse children and finally pass back through it singing ‘Be Back Soon’ as they wave goodbye to Fagin as members of his gang. It is also their movement that makes ‘Consider Yourself’ such a success. They are led by The Artful Dodger of Charlie Barnard who proves a highly accomplished singer, actor and dancer, and who ominously suggests in the way in which he mirrors Bill’s movement when he enters Fagin’s den that he is another Sikes in the making. Oliver himself is played by Wesley Kent-Hargreaves who combines a sensitive waif-like persona with highly pleasing singing in numbers such as ‘Where is Love?’. 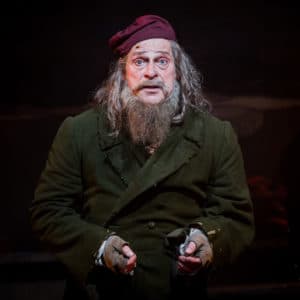 While last year’s Fiddler was led by Bryn Terfel as Tevye, this Oliver! also sees a star operatic baritone take on the role of Fagin. While, however, the image used in advertising makes Simon Keenlyside look more like a Bill Sikes, on the stage he is very much a Fagin in the Ron Moody mould. He utilises his excellent baritone very effectively so that it does come to the fore, but does not feel too overwhelming in what is predominantly a character role. It is possible, and perhaps even desirable, to virtually speak half of Fagin’s lines, and there is a great smoothness in the way in which Keenlyside switches modes of voice within his songs to bring out a range of effects.

Keenlyside is a strong and entertaining mover, and throws himself completely into the part as a few self-conscious jokes are included. One boy reprimands him for getting carried away at the end of ‘You’ve Got to Pick a Pocket or Two’ by pointing out that this isn’t an opera, while Keenlyside really plays up the scene in which he surveys the ‘rich’ audience through opera glasses.

Fagin’s loveable roguishness is deliberately made to contrast with Bill Sikes’ menacing sternness, especially in their first encounter in which the latter says nothing. However, this Fagin feels just a little too comical because it is not always obvious that he jokes with Bill precisely because he is terrified of him. Similarly, when Fagin turns on Oliver when he thinks he has overheard him he should be as frightening as Sikes, but even here he does not seem so hard. Simon Lipkin captures Bill’s chilling presence but it does feel as if ‘My Name’ would benefit from the type of operatic bass voice that in standard matched Keenlyside’s baritone. Still, this Sikes comes complete with bull terrier Bullseye who, along with several principal roles, has his own sponsor. So too do the gin and the gruel!

What lifts this production to another level is the number of outstanding moments in Act II. There are two performances of ‘As Long As He Needs Me’ which Jodie Jacobs as Nancy brings to shattering climaxes, and there is a perfectly pitched comedy scene in which Mr Bumble and Widow Corney (by now his wife) ‘enjoy’ their domestic bliss. ‘Who Will Buy?’ performed from all around the auditorium gives the audience the same feeling of blissful excitement as Oliver himself is experiencing, Keenlyside delivers a stirring performance of ‘Reviewing the Situation’, while the chase for Bill Sikes is very effective as it exploits the depth of the stage and features David Plater’s excellent lighting. With such a considerable list of merits, it may come as no surprise that, although there are three brief ‘encores’ (all in the original score) during the curtain call, the audience is still left wanting more.