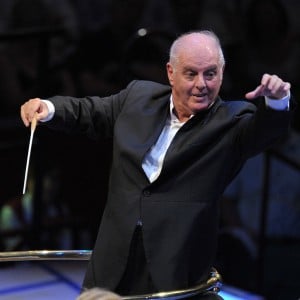 Whether formally or informally, Promenaders knew two years ago that Daniel Barenboim would be conducting an entire Ring Cycle over a week at the 2013 festival. Anticipation over the past few months could not have been higher, with the Ring alone possibly being responsible for the introduction of weekly passes at this year’s festival, and so the simple question now is was it worth the wait?

Based solely upon the Staatskapelle Berlin’s performance of the first opera, Das Rheingold, the answer has to be “yes”. Its output was clear, precise, balanced and beautiful throughout, and there were some truly wondrous moments such as the first, richly hued delivery of the Valhalla leitmotif, the entrance of the Giants which told us everything about their characters, and the powerfully wrought crossing to Valhalla. For the most part, however, understatement was the watchword and while such an approach very often proved effective, in the Albert Hall’s vast interior a few moments felt just a little too tame. The effect may have varied, however, in different parts of the hall, and the perfect spot for this Ring Cycle may well be the front row of the arena. The orchestra’s sound is so precise that it should feel balanced even at such close proximity, and this could be the best place in which to feel all of the music’s power and emotion.

The evening was ‘staged’ fairly well with the majority of the singers – and especially Stephen Milling as Fasolt, Erik Halfvarson as Fafner and Peter Bronder as Mime – acting their parts to great effect. Erda (Anna Larsson) appeared in front of the Albert Hall organ above the bust of Sir Henry Wood, while the mesmerised reaction of Wotan and Loge to Alberich turning into a dragon generated as much awe in the audience as if the latter had just witnessed the most cutting edge CGI creation. Although the performers were not costumed, their clothes spoke volumes about their characters. The Rhinemaidens (Aga Mikolaj, Maria Gortsevskaya and Anna Lapkovskaja) wore shimmering ‘watery’ colours, Loge sported a fiery tie, and Wotan’s sleek dinner jacket with black shirt contrasted markedly with the Giants’ more basic suits. That only Fafner of the latter pair wore a waistcoat also suggested something about his greater aspirations.

On a few occasions, however, the staging fell flat. Most of the Rhinemaidens’ teasing of Alberich was directed forwards rather than at him, and this problem could have been easily remedied by positioning him on the step in front of them rather than at their side. Similarly, at the moment when Fasolt was killed he simply exited the stage. We did not necessarily need to witness the blow and the fall, but the music generates a sense of something coming to a standstill, which was undermined by his walking movement. In a concert performance these relatively minor problems would have been forgettable, but they are slightly less so when the Prom bills itself as semi-staged and has a stage director (Justin Way).

Iain Paterson proved a brilliant Wotan. Alongside his firm, and nuanced, baritone voice he radiated a strong sense of flawed authority. When the Giants first confronted him his face revealed his position of weakness and desperation at having no solution, alongside a total refusal to project anything other than a sense of superiority over his adversaries. Similarly, after he paid off the Giants and witnessed Fasolt’s demise, his outward show of victory was so clearly mixed with feelings of guilt and shame. As Fricka, Ekaterina Gubanova produced rich lines with some sumptuous hues, Stephan Rügamer had the perfect tenor instrument for Loge while Johannes Martin Kränzle was a tremendous Alberich. Only the days that follow will reveal exactly how Barenboim’s Proms Ring Cycle plays out, but it has undoubtedly got off to a very strong start.

Wagner’s Ring Cycle continues at the Proms with Die Walküre on 23 July, Siegfried on 26 July and Götterdämmerung on 28 July, while Tristan und Isolde will be performed on 27 July. There are a few seated tickets left for each, and for each concert there will be a quota of £5 standing day tickets, although early queuing is advisable for these.

For further information on these and all BBC Proms click here.