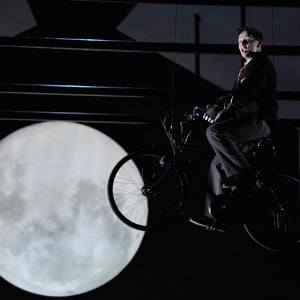 This funny, feisty, finely sung version of one of the most difficult to stage of all Handel’s operas, brings Glyndebourne’s exceptional 2014 season to a rousing close. Apparently, Robert Carsen’s vision of Rinaldo was disliked when it was first seen in 2011: not so here, though, since as our review shows, we recognized its excellence from the start. As revived by Bruno Ravella, it’s even better now, hence that last ‘half star’ – principally due to the performance of Iestyn Davies in the title role, and a touch more snap to the routines, which are slick, polished and sometimes endearingly camp. The concept of the action as seen by the world-domination dreams of a member of the Lower Sixth at St Cake’s still makes perfect sense, with the classroom globe and the in-desk pin-up as the focus of our hero’s conflict between power and love.

It’s always a challenge to stage Handel’s more taxing arias – do you have the singer simply park and bark (or rather yelp) or do you invent frankly daft things for him to do whilst he negotiates all those terrifying leaps? This production solves that problem brilliantly: ‘Venti, turbini’ and ‘Or la tromba’ are two of the composer’s most fiendish, and Davies sings part of the former astride a boneshaker , ‘riding’ across the sky; the latter’s duel with the trumpet is staged as a ‘martial dance’ routine. Daft? No, not really – they fit both the music and the spirit of the piece, and gave rise to much mirth in the audience – even before the long champagne interval. How we stomped and cheered as our boy merrily pedalled across the sky­ – it was almost as much fun as the thunderous, rose-strewn curtain call at the third performance of Rosenkavalier.

Excellent as Sonia Prina and Brenda Rae were last time, this year’s Rinaldo and Armida – the latter the Canadian soprano Karina Gauvin, making her Glyndebourne debut – achieved the near-impossible in outdoing them for sheer panache and dramatic urgency. Davies’ Rinaldo was the callow schoolboy and the amorous hero to the life (a bit like Bill Bryson’s Thunderbolt Kid at times) making us believe in his struggle between the charms of his Almirena and the glory of conquest. He had just enough swagger to make his unlikely hero convincing, and as always he sang with liquid sweetness, exact projection and crystalline diction.

Karina Gauvin’s is a full, rich-toned voice, allied to an exceptionally confident stage presence – villainous the character may be, but she managed to make us warm to her, deftly working the audience’s response to those conflicting emotions. Christina Landshamer’s Almirena was another Glyndebourne debutant of whom we are sure to hear more; she portrayed a most credible ‘teacher’s pet’ whilst singing with poise and grace, especially in ‘Laschia ch’io pianga.’ Tim Mead was a superb Eustacio last time, and his ‘graduation’ to Goffredo allowed us to hear one of the most noble counter-tenor voices around in a role perfectly suited to it; his scene with his daughter at the reunion was one of the most touching operatic moments of the year.

Eustacio was this time sung by Anthony Roth Costanzo, in his UK debut – this is a smaller, more delicate voice than that of either Davies or Mead, but it was forcefully used and allied to a vibrant performance of a difficult role. James Laing’s endearingly daffy Magus was the fourth countertenor on stage, and another fine voice well suited to a part.

Joshua Hopkins will be familiar to Glyndebourne audiences; we much admired his Count in the 2013 Figaro, and he has sung Argante on the Tour; this time, he brought that role to the main house with resounding success, singing with true Handelian style and creating an almost-lovable villain. The Furies reminded some of us even more vividly than before of those heady schooldays of boy-torturing and hairstyles longer than our skirts.

The Orchestra of the Age of Enlightenment under Ottavio Dantone, who made his house debut with this show in 2011, were simply magnificent in all departments, a fact warmly acknowledged by both cast and audience. No Handelian could have asked for more than these players gave under this exceptionally sensitive, responsive conductor – and he’s a mean keyboard player, too. Amongst the many special delights were Jonathan Manson’s exquisite ‘cello continuo, Elizabeth Kenny’s characteristically fine Theorbo and the forceful contributions of Chi­chi Nwanoku’s double bass.

If you have yet to experience a Handel opera onstage, or if you’ve been disappointed by a poor production, then now’s your chance to see one that’s witty, touching and engaging, not to mention allowing you to hear some of the composer’s greatest arias. If you are lucky enough to be under 30, you can see it on August 12th for just £30 – even for the best (normally £160) seats in the house. You’ll have a wonderful time.