Massenet’s Werther may possess a wondrous score, but the tale of a woe stricken and doomed poet hardly generates action in abundance. As such, it is really down to the performers to hook us into the piece emotionally by seeing us engage with the characters at every turn. Even the staging cannot take much of the strain, as it would be disastrous to introduce superfluous visual details in an effort to sustain interest, but it can provide an effective setting to support the performers in their endeavours. This is exactly what Benoît Jacquot’s 2004 production does, and this second revival with Andrew Sinclair at the helm possesses exactly the right cast to make us willingly go on every step of each character’s psychological journey.

Several of the sets create diagonals across the stage, and are possessed of many telling details as they highlight the passing of the seasons. For example, in Act I the high wall of Le Bailli’s garden reveals life and growth at one end and death and dereliction at the other. The huge gate set within it, when open, creates a gap that suggests that the transition from one state to the other can be prevented. When it is closed, however, it implies that the slide is inevitable.

Act III’s set is decked out to look exactly like a Vilhelm Hammershøi painting. He is an artist that many designers look to when staging Ibsen, and it is not difficult to see why as his monochrome shades highlight feelings of unease and isolation. Here the similarities are made all the stronger by the curtain rising on Charlotte with her back to the audience assuming the pose of many a woman in his paintings, while items to be found in his pictures are incorporated into the drama. A square piano lies along the back wall, which (nearly) ties in with Werther’s reference to a harpsichord.

The lighting is also intelligent, with many scenes seeing the action illuminated predominantly from one angle. Act I’s moonlit encounter sees the figures lit diagonally from the back, while in Act III the light floods in from stage left creating huge shadows across the floor. Werther’s study is represented by a small box-like area that, surrounded by darkness, really draws us into the tragedy of the poet’s death, as half of the room is bathed in light and the other in darkness. 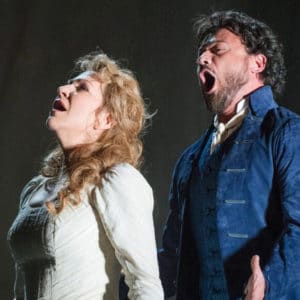 Vittorio Grigòlo and Joyce DiDonato are outstanding as Werther and Charlotte respectively. As soon as Grigòlo sings ‘O nature pleine de grâce’ we strongly sense how this poet is self-centred and caught up in his own emotions, and yet Grigòlo is never so melodramatic as to suggest that Werther is not a deep thinking and feeling ‘aesthete’. His relationship with DiDonato’s Charlotte is also rendered highly effectively, especially at the end of Act I when on many occasions one of the pair sings outwards as the other gazes on. Werther stares heavenwards espousing the ideal love he has conjured in his mind, while Charlotte looks on dotingly, and Charlotte considers her responsibility towards her family as Werther gazes at the object of his desire.

Grigòlo sings at the top of his game, and if in Act I his voice is a little too abrasive, he never reveals less than total commitment as his powerful voice reverberates around the opera house. Thus when this one difficulty is overcome, we enjoy superlative performances of ‘J’aurais sur ma poitrine’ and ‘Lorsque l’enfant revient d’un voyage’. In spite of the obvious strength his voice reveals, Grigòlo does skilfully manage his sound as he switches into different ‘modes’ for certain lines, and this enables him to render a convincing death in which his final lines feel ‘gasped’ and yet still thoroughly musical.

The precise colours in DiDonato’s voice may not be a total match for those of Charlotte, but the quality of sound and expression more than make up for this. Alongside the trademark attention to detail in phrasing, DiDonato brings a glow to her sound that makes us feel the intensity of Charlotte’s feelings. She can at times, however, apply a slightly harder edge to aid both clarity and the sense of anguish, and her performance of ‘Werther! Qui m’aurait dit / Ces lettres!’ is a real highlight of the evening.

The rest of the cast is equally strong. Heather Engebretson, first seen at the Royal Opera House last September as Barbarina in Le nozze di Figaro, is a superb Sophie who always brings appropriate volume and levels of vibrato to her singing, while still making her sound feel sweet and light at every turn. She also makes us appreciate how the opera is also about Sophie’s tragedy for she too loses the man she loves. David Bizic, with his warm and secure baritone, is an excellent Albert who seems pleasant enough on the surface and yet is deeply vulnerable himself. In Bizic’s performance one senses that his decision to send pistols to someone who he must surely know plans to commit suicide derives from desperation to secure his own ‘domestic bliss’, rather than from genuine malice. With both displaying strong voices and excellent timing, François Piolino and Yuriy Yurchuk are class acts as Schmidt and Johann respectively, while Jonathan Summers is a highly effective Bailli. In the pit Antonio Pappano caps it all with his sensitive and stylish conducting.

Werther will be broadcast live to selected cinemas in the UK and worldwide from 7.00pm on 27 June, while some cinemas will also show encore screenings over subsequent days. For details of participating venues visit the Royal Opera House Live Cinema Season website. The opera will also be broadcast on BBC Radio 3 at 6.30pm on 15 October 2016.