Q&A: A Hawk And A Hacksaw 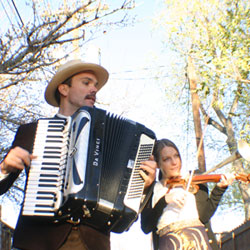 A Hawk And A Hacksaw

New Mexico duo A Hawk And A Hacksaw, consisting of erstwhile Neutral Milk Hotel member Jeremy Barnes on accordion and drums and violinist Heather Trost, have over the years steadily build up a reputation for releasing consistently engaging albums that draw on the traditions of Eastern European music.

Their sound is dominated by Barnes accordion playing which instils the music with real vibrancy and energy. Their career to date has taken them in several interesting directions, beginning with a contribution to The Gulag Orkestar, the debut release by Beirut before leading on to collaborations with indigenous Balkan folk musicians such as The Hun Hangar Ensemble.

This variety goes some distance to indicating the wide musical ground they traverse. Earlier this year they released Cervantine, their fifth full-length album, and their latest project sees them play a live soundtrack to screenings of Soviet director Sergio Parajanov’s film Shadows Of Forgotten Ancestors, a film billed as “a classic of Ukranian magical realist cinema”.

Ahead of a short UK tour and the soundtrack’s release as an album next spring, we fired some questions over to Barnes, who kindly batted some answers back.

musicOMH: You are currently playing live shows that involve you playing a live soundtrack to Armenian director Sergio Parajanov’s film Shadows Of Forgotten Ancestors. How did this come about?
Jeremy Barnes of A Hawk And A Hacksaw: Shadows of Forgotten Ancestors is one of my favorite films, and it had been in my head to do a live soundtrack with it for a long time. It is not a silent film, it has some wonderful music, and so we are sort of collaborating and commenting on the existing soundtrack. The film was made in 1964, and is based on a Ukrainian folk tale, that takes place in the high Carpathian Mountains. Because it is a folk tale, the Soviet censors allowed Paradjanov to have free reign – and therefore there’s quite a bit of psychedelic visuals and freaky moments.

OMH: Do you think a version will be released as an album at any stage?
JB: Yes – we just finished an album of music/songs inspired by the film. It was produced by John Deiterich from Deerhoof. Initially the idea was to do a short EP but everything worked out well, and now we have around 45-50 minutes of music. Working with John was amazing.

OMH: Your first album was also a soundtrack to a documentary. Do you approach making music for film in a different way to your regular albums? I think your sound lends itself to it quite well to soundtracks.
JB: Actually, no, the first record was not a soundtrack, but much of that and the second were later used as a soundtrack. We are definitely interested in the audio/visual marriage, and although many people do feel that most of our music is cinematic, we approach working on a soundtrack differently. Silence becomes so important. You can use silence in this context in ways that are impossible in a normal concert setting.

OMH: Are you big cinema fans? Do you have any favourite directors?
JB: Of course. Paradjanov is probably my favorite director, but I also love Roman Polanski, Stanley Kubrick, Charlie Chaplin. I love the film Come and See directed by Elim Klimov.

OMH: Coming back to your music, earlier in 2011 you released Cervantine, your fifth album. Has your approach to making music changed in any ways over the years? In what ways do you think your sound has changed/progressed?
JB: It changes from album to album- the motivations for our new recordings are miles apart from the motivations for Cervantine. The new record is entirely a duo record, except for a few donations from John Dieterich. Cervantine was a big ensemble record. I think it is important to change things around and look for new ways of working, definitely.

OMH: Cervantine features two new musicians, Stephanie and Chris Hladowski, and you have collaborated with other artists in the past. Do you see this trend continuing in the future? Is there anyone in particular you would like to work with?
JB: We only really work with people we know well, but yes, I am sure that in the future we will bring in some more guest stars.

OMH: Cervantine was released on your own label, L.M. Dupli-cation. Do you have any specific plans for it? Will you be focusing on releasing certain types/genres of music?
JB: We are doing a reissue of two home recorded albums by Appalachian folk hero John Jacob Niles, as well as releasing the new AHAAH record next year. The label is primarily folk based, but not rooted to one region.

OMH: When and how did you first begin to become interested in Eastern European music? Were there any particularly important bands/artists for you?
JB: I lived in Chicago in the Ukrainian district, and everyone in my apartment block was from Eastern Europe. The cooking smells were different, the languages in the hallways were different. I found an old Romanian record in the charity shop and bought them for their ridiculous technicolor covers of peasant folk life. When I put it on, it was a revelation, and completely changed everything for me.

OMH: In many ways I think the live environment is the best and most natural place to hear your music. To me it has always sounded very social. Is that something you would agree with?
JB: I suppose so – although I think that as you mentioned, much of our music benefits from visuals- I think it helps people who are unfamiliar some of the melodic and rhythmic material.

OMH: Do you find that your live shows produce a different level of reaction/response in certain countries?
JB: Certainly. We love playing in Europe, especially Poland, Hungary, Romania. But England has always been very accepting, more so than France. I think the English have great taste in music, whereas the French seem confused.

OMH: I read that you have lived in different parts of Europe over the years. Do you have a large fan base across Europe? Are there any countries that you are especially popular in?
JB: For some reason playing in Poland is always great. I lived in France and England, and Heather and I lived in Hungary. At this point we are completely settled in New Mexico, but I miss the music and people of Hungary.

OMH: Where are you based these days? Does environment/geography affect or influence how you make your music?
JB: I think geography influences lifestyle, which in turn effects music. We live on an acre of land in New Mexico, we irrigate from an old Spanish ditch, we have fruit trees, grow corn and chilis, and live close to our families.

OMH: What music are you currently listening to? Do you have any favourite releases from 2011?
JB: The Smile box set is really exciting. Also the Tompkins Square reissue “To What Strange Place: Music of the Ottoman-American Diaspora.”

OMH: I think many of your fans would probably list alternative guitar based music as the genre they are most into yet your sound doesnt really fit in with this. Is that how it feels? Id like to think you offer proof that peoples tastes have diversified to an extent over recent years.
JB: We are definitely outsiders – which I think this is a good thing.

OMH: Finally, Neutral Milk Hotel have enjoyed renewed appreciation over recent years. How does it feel to read so many positive comments about their music? How do you remember your time in that band Jeremy? Are you still in touch with Jeff?
JB: I was 19 when I joined the band, and it was a great period for me. During our time as a functioning band, we didn’t have a lot of financial success, so it has been odd to see the project grow and do well in the last 12 years since we stopped playing. I am glad people like it, of course- but I am also happy to not be in it’s shadow, and I feel at this point that AHAAH has it’s own identity, apart from Neutral Milk Hotel. I am still in touch with Jeff, he is one of my best friends.

A Hawk And A Hacksaw’s soundtrack to the film Shadows Of Forgotten Ancestors is out early in 2012 through L.M. Dupli-cation. A short UK tour begins at the Norwich Arts Centre on 30 November and includes a stop at London’s Barbican on 1 December, with dates in Italy, Portugal and Switzerland to follow. The band also play ATP at Minehead in March 2012. More at ahawkandahacksaw.net.

Questions were posed by Steven Johnson.

A Hawk And A Hacksaw MP3s or CDs

A Hawk And A Hacksaw on Spotify