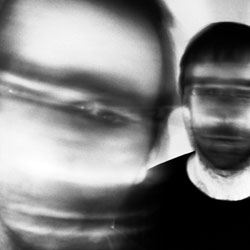 Even for the musically well seasoned, Autechre can present something of a challenge. This challenge inspires fierce passion among their followers, who warm to the stand-out facets of their music – its architecture, scope and ambition, even the unpronounceable track names.

With that in mind I might expect an interview with a member of the band to be a challenge in itself, but it soon becomes clear in the course my chat with Rob Brown that this is going to be nothing less than rewarding. He is an extremely affable interviewee, candid in his assessment of the band’s music and equally aware of their listeners.

We begin by talking about the new album Oversteps, Autechre’s tenth in nearly two decades together, and their approach to its recording. Brown dives straight in at the deep end. “We’ve always found it rewarding to make music that’s got that bit of effort in, and we look for that extra facet as opposed to getting bored. It’s right up our street, that sort of approach.”

Their methods are thorough. “With headphones you get a different picture,” he explains. “We might record tracks and play them on speakers, and then check on headphones to see they sound right. There can be differences, and with that way of listening to stuff late at night you get an extra insight. Radio is great for that, as you have loads of people that get to listen but they have their own private booth. Whether it’s the sounds of traffic or the club, it has to do the right thing. We like to deconstruct our work.”

“You can make things feel present or dislocated, like a drop in the ocean”
– Autechre’s Rob Brown on perspectives within the duo’s music

The context for their music, he says, was influenced by the acts they listened to in their early years. “We grew up on Mantronik, Art Of Noise, Grace Jones, Public Enemy. They would do things that are mind blowing, and nine out of ten times on an album would come up with something new. We’ve always felt competitive and humble if you like, but are always looking for something game changing when we work.”

Do they look for a particular pitch to centralise their music, or if they prefer more freedom and flexibility? “That’s almost impossible to answer, that question, but we do things a lot more by instinct I think, because we’ve never had any musical training,” he says. “We’ve always liked that world between, where we are pitching a tone and a rhythm. We find that the slower the tone the less beauty it has, so rhythm and pitch have become a top playground for us to inhabit.”

Ultimately composing music of any kind is about self-expression. “We realised we did things in a certain key, but would not know what it was. It occurred to us another one would fade over and we’d try to work out why it wasn’t disastrous. We don’t have time for musical theory, but a lot more for practice. We’d be told our music was quite Wagnerian, dark and depressing, when we thought things were uplifting! Overall we know what we like more than we know what we’re doing. It’s always about you writing what you feel.”

Some Autechre music is strongly evocative of weather systems and landscapes, so it is a natural assumption the band might have images in their mind to project. But Rob refutes this. “I think that’s something that comes to you as a listener. I used to work as an architect, and one thing we would enthuse about was structure. Somewhere along the line it’s been inferred that we do architectural music, and I think scale is worth trying to invoke, with some kind of hidden thing. You can make things feel present or dislocated, like a drop in the ocean.”

So how would he describe what Autechre do? “Our language is our own art. You can blur the lines a bit but you’re at risk if you depend a whole career on it. It doesn’t stop us exploring sound though. We do feel attracted to emotion, scope and scale. But as far as elaborating on what we aim to project, I think that’s for the listener. What we do is write music that’s good on headphones and allows you to navigate – whether you’re on a bus in the wet, or walking down the road. Now and then we like to whack you in the face with a massive beat!”

“The club space, if it’s dark and a bit foggy, with a console of twitching lights – that’s the ideal venue for us”
– Rob Brown reveals Autechre’s perfect performance space

Their music provokes a variety of reactions, and nowhere more so than in live performance. Brown senses these responses, but says the band don’t dwell too much on them. “We don’t watch, though one eye might poke over the console now and then. It’s often out of the corner of your eye you can sense the gist of the mood, as well as with the shouts and the chants. You get a clear cut idea with some people but often it comes from within. So we might ask, ‘Did we fail, or did we succeed?’ We’ve perhaps got too much to deal with to regard the audience.”

How so? “Sometimes we can be going up a furious avenue”, he continues, “and take it to a logical conclusion. There is that tribal thing, getting your hands dirty. In a sense with both sides it’s a chain reaction, making it up as you go along. But luckily for us we’re in to a cinematic affair when we play live. If people have their eyes shut that’s good for us, and we prefer that to visuals. If you have amazing visuals but the music’s no good, then you’ve channeled your energy in the wrong conduit. Without lights people go off at more of a tangent, and shift to another parallel. The club space, if it’s dark and a bit foggy, with a console of twitching lights – that’s the ideal venue for us.”

As he says, clubs have always been the venue of choice for Autechre. “We actually met in about ’86-’87”, says Brown, “and we were fledgling hip hop kids – he was doing dub mixes with his gang. We met through graffiti, but people said we talked music like our lives depended on it. We still speak roughly the same language musically. We are similar, and we’re quite compatible, and that’s even in a weirdly competitive sort of way, as we’ve finished each other’s work off at times. We work using patchwork methods, exploring different ways of colliding the ideas.”

He talks with understandable affection about the early years. “Sean and I grew up too young to get into the clubs, so we’d be taping club music in the middle of the night. Music was personalised to us, and we had similar exposure to similar music. We were often quite different to other people but we got on like a house on fire. To get in the Hacienda was a bit difficult when you were 16, so we absorbed the music differently to how we would have done if we were in front of a PA stack.”

The duo are a one-label act, making all their albums for Warp. “It’s a very changing thing,” says Brown of the label. “There’s the classic acts, obviously, but with some of the new ones it takes me a while to register they’re on the label. Maximo Park were on the radio a lot and it took me months to realise they were on Warp. I do view the label as an entity with many sides to it. I was really chuffed when they got Jackson And His Computer Band, but I’d heard more of that on TV. When we started it was a handful.”

With Brown enjoying his reverie, time is unfortunately up – but speaking with an artist so assured in their form and their purpose proves an enlightening experience. It’s fair to assume Autechre, even after so long together, are still in step as they stride forward down the road of exploration.

Autechre’s new album Oversteps is out now through Ninja Tune. The band are on a European tour until April 10th, when they play at a London warehouse venue yet to be announced. Full tour dates can be found on their Warp artist page.