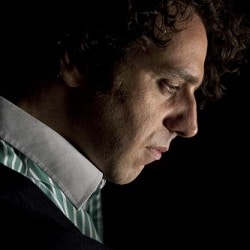 Eight years after Chilly Gonzales put the lid on his first solo piano album, the eclectic Canadian keyboard wizard returns with a sequel of equally delightful yet preposterously mad showboating. As a listen, Solo Piano II is even more impressive than the first as Chilly hunches over the piano with his hair in his eyes, sweating feverishly over a cluster of notes, looking like a dead ringer for the late Hungarian master pianist Franz Liszt.

The musical pair share more than mere appearances. From their supreme technical ability to tinkle the ivories to their love of entertaining, the similarities are uncanny. Sure, Liszt was born 200 years before Chilly recorded Solo Piano II over nine busy days in a Paris studio, but their musical missions seem identical.

Liszt was an egomaniac who pioneered a flamboyant stage show backed up by his blazing technique on the keys. Poet Heinrich Heine described one concert by Liszt as a kind of circus, with “magnetism and electricity; of contagion in a sultry hall filled with hundreds of perfumed and perspiring people; of histrionic epilepsy; of the phenomenon of tickling; of musical cantharides; and other unmentionable matters”.

These days for Chilly, those ‘unmentionables’ would be a spot of crowd surfing, a morsel of naughty rhyming and an eight-minute solo piano meditation. And with the same need to thrill and entertain as Liszt, the outspoken Paris resident says his secret to wowing the crowd is to pay ‘respect’. “That respect is what separates a true artist from a true entertainer. A true artist may be content to only please themselves and musically masturbate in public, where I need to really establish a connection, satisfy and make love to the audience,” he says. But don’t take his word for it. Experience his love-making as he brings his madcap keyboard antics (Rough Trade East on 7 September is the next chance, at the time of writing).On 20 October at the Barbican, the fleet-fingered Quebec keyboardist will unveil his next audacious trick, a new piano concerto to be premiered with the BBC Symphony Orchestra).

“An orchestra is the world’s most expensive synthesizer,” he states. “I grew up playing a synthesizer, and flutes to me meant using patch 22. Now I have 22 flute players!” he says with a devilish laugh. Conducted by Jules Buckley, the work will have four ‘traditional’ movements, including a ‘heavy’ cadenza in the last movement and a second that “is but a trifle”, according to Chilly. “I wanted the piece to be both conservative and surreal, within the confines of a traditional piano concerto. I like how the piano’s voice has to fight to be heard.”

But just because he talks the talk, don’t think that the charmingly immodest 39-year-old Chilly – born Jason Charles Beck in Montreal – has much love for classical music. He calls it ‘condescending’, while he fingers jazz as ‘self-indulgent’. Instead, he loves a good pop song, mixed with the showmanship of an MTV video. “We live in the era of the three-minute song. It’s a great era to live in and I’m extremely happy to be here! So I’m trying to walk a tightrope between wanting to please my audience in a very linear way. But I’m not a bubble-gum, lowest-common denominator artist,” he says. “It’s my job to go deeper than just cynically giving people what they want. The role of a real entertainer tries to take it even further. Even if you hear me play some of the same chords from a Ravel song or a certain rhythm that you’d expect to hear on a minimalist piano record, I’m just grabbing those things!” He pauses, then adds dutifully, “And putting them into the service of what I consider to be modern-day pop music.”

This musical service includes stints as a rapper, jingle writer, studio wizard and collaborator. “I’m a rap dilettante. But I’m also a musical genius,” he boasts. And with raps on his Ivory Tower album that read “I’m a dog shit ashtray, I’m a shrugging moustache wearing a speedo tuxedo,” or “I’m an imperial armpit sweating Chianti, I’m socialist lingerie, I’m gay pastry and racist cappuccino,” Chilly is nothing less than a showman. He certainly has the flow for a dude wearing a cravat.

That said, for all his musical dabbling and frippery, the overriding impression remains that the piano is the real key to Chilly’s happiness. “The two solo albums and the Piano Concerto are the beginning of a journey,” he says. “Of course, it’s a very ambitious and expensive journey. With the solo albums, I wanted to make the piano an instrument of its time. Now this is the start of my attempt to make the orchestra an instrument of its time!” Moving to Paris before recording 2004’s Solo Piano I has helped the album become, he says, “a product of my life which was filled with solitude. Which led to me making an album dedicated to that solitude.” He elaborates. “But while I live in Paris, I don’t spend much time here. I play more than 100 shows each year. You find me on records by Drake and Feist and my music is used in iPad commercials. That wasn’t the case in 2004. And that’s reflected in Solo Piano II, which is much more pop, much more modern, faster moving and packed full of contradictions.”

Strangely, there are very few contradictions in this new album. In fact it’s all in quite remarkable harmony, as Chilly drills down every riff and lyrical passage into a missile aimed straight at your heart. On Solo Piano I, he wandered aimlessly, if pleasantly, as he noodled away on the keyboard. But the songs on the new disc find Chilly entranced in an almost circular, Steve Reich-esque rapture, stacking melody on top of riff, between a groove and under a gushing flourish until you are hooked.

Repeat that practice 14 times and you’ve got Solo Piano II. “Take classical and jazz music. They both contain certain elements that are truly obsolete and don’t need to be preserved,” Chilly declares. “For me, the way to make the music seem alive is to adapt it to today’s world.” Or, as Liszt once quipped, “The concert? It’s me.”

Chilly Gonzales’s Solo Piano II is out now through Gentle Threat. He plays Rough Trade East on 7 September 2012, then the BBC Symphony Orchestra date at the Barbican on 20 October. Further information on his schedule can be found at chillygonzales.com