Interview: Of Monsters And Men 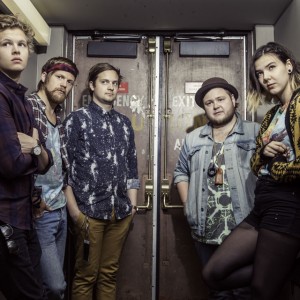 We can’t get enough of the Scandinavians just now, can we? From their bleak crime dramas to their minimalist interior design to even their bloody jeans companies, Nordic culture is everywhere at the moment – and that of course includes the music. The Scandi nations have always had a presence in popular music that far outweighs the small populations of their countries, from ABBA to Ane Brun, and Iceland is no exception – its tiny population (a miniscule 320,000) punches far above its weight with Björk, Sigur Rós and now quirky folk-poppers Of Monsters And Men.

“I’d like to think so,” says the band’s co-vocalist and guitarist Raggi Thórhallsson, when we put to him that Icelandic popular music seems to have a more experimental, less commercial focus than much of the pop music from other countries. The famously eccentric Björk in isolation could reasonably be an anomaly. Björk plus Sigur Rós – a band whose musical exploits include making up a gibberish language called ‘Hopelandic’ and recording an EP that features a fisherman reciting traditional Icelandic poetry – begins to look like a national disposition towards the off-kilter and the downright weird.

Of Monsters And Men might be a whole lot more accessible than either of Iceland’s two most famous musical exports, but their uplifting, ethereal folk rock is still a fair way off the brain-dead idiot-pop and landfill indie that clogs up an unfortunately large portion of column inches outside of their homeland. “I think it’s because of the music scene in Iceland. Everybody knows everybody, so you don’t want to be doing anything similar to your friends’ band. That definitely helps people to be different and unique,” he offers.

Everybody knows everybody, so you don’t want to be doing anything similar to your friends’ band. That definitely helps people to be different and unique.”
– Raggi Thórhallsson on Iceland’s music culture

Of Monsters And Men’s debut album My Head Is An Animal reached Number 1 in several countries including Australia and Ireland, as well as Number 3 in the UK, and its lead single Little Talks was a surprise leftfield hit around the world. But despite this phenomenal worldwide success and their subsequent globe-hopping, the band remain intensely loyal to Iceland and its music scene. “There are lots of other great Icelandic bands that deserve more attention. There’s one playing with us tonight, actually,” Thórhallsson says, referring to 20-year-old folksy singer-songwriter Ásgeir Trausti (and taking great care to spell his name out correctly for me). “He will be the next thing to come out of Iceland and do very well,” he predicts.

The band never thought they’d make it as successfully overseas as they have done, and seem to greet their triumph with a sort of wide-eyed, bemused amazement. “It was a dream. Every musician has that dream in the back of their head, but we never expected this to happen. As a dream it’s very hard to achieve, and it’s happened so fast.”

When we speak to Thórhallsson, the band have just played T in the Park; before that, their festival appearances included Bonnaroo and the coveted Other Stage at Glastonbury – a clear indicator if ever there was one that the dream has become a reality. “Glastonbury was the nicest festival I have ever played. The energy was so high, the crowds were so big. We have played similar-sized crowds before at similar-sized festivals, but this was a different level.” Earlier in the year the group played both South American legs of the recently-expanded Lollapalooza festival, as well as Coachella – proof, if any more were needed, that they’re here to stay. Fellow folk-rockers Mumford And Sons headlined both T in the Park and Glasto, and Thórhallsson points to them as having been important in his own band’s rise to fame, if not necessarily as a direct influence then as having whetted audiences’ appetites for folk. “They have definitely paved the way for all the folk music,” he says. “There is a lot more folk music going on.”

Next up for Of Monsters And Men is Fuji Rock festival in Japan, followed by a tour of Australia that takes in both Splendor In The Grass and the Spin Off festivals, and then another round of European festivals – including V. With all this live activity going on, can we expect new material from the band any time soon?

“No one is bossing anyone around – we trust each other to do something good! That’s the best thing about being in a band, creating something with your friends. It’s a special moment.”
– Raggi Thórhallsson

“There is no new material soon, but this tour that we are on is ending on 21 August. We’re going to go home to Iceland and start focusing our ideas. I think we have about 15 ideas or something for the next album, and our goal is to record the new album next summer.” So keep your ears peeled for more from Of Monsters And Men around next autumn or winter.

With five people in the band, including two lead singers – Thórhallsson shares vocal and guitar duties with the group’s only female member, Nanna Bryndís Hilmarsdóttir – as well as various touring members to fill out the sound on top of that, songwriting sounds like it could be a fairly complex and even fraught process. Thórhallsson dismisses this idea. “It’s mainly ideas from Nanna and myself, the melodies and the chord arrangements, and then we’ll take it into the rehearsal room and add to the song together, electric guitar and things. No one is bossing anyone around – we trust each other to do something good! That’s the best thing about being in a band, creating something with your friends. It’s a special moment.”

Of Monsters And Men’s influences in that songwriting process have changed and broadened over the past couple years, as their experience of the world has changed and broadened. “When we wrote the last album we were in Iceland and we had hardly ever been abroad – except for maybe Spain or something. So Iceland inspired the last album a lot, the agitation of not being able to go out of Iceland, thinking about what the world looked like – that was very inspiring. But now we have travelled the world, we’ve played in all of these places, we will use that.” The band aren’t going to be forgetting their roots anytime soon, though. “Maybe the next album will be about going home!”

Of Monsters And Men play the V Festival in Chelmsford and Stafford on 17-18 August 2013. The album My Head Is An Animal is out now through Island.

Of Monsters And Men MP3s or CDs

Of Monsters And Men on Spotify