The National: “There’s a sense that we’re all more responsible for our actions now” – Interview 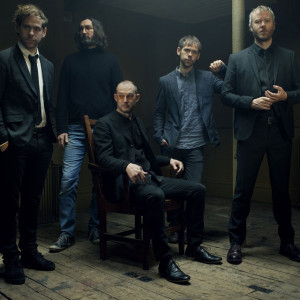 Judging from the promo images, The National‘s Scott Devendorf – with his orange aviator sunglasses and broad smile – is the most content member of the band. But is this true? Is their new album Trouble Will Find Me the band’s “fun death record”? And would it have been better to do an album of Bloodbuzz Ohios?

There was almost no interview: Skype was being its echoic, feedback self and the mobile reception was appalling. Thank the gods for the BT Decor 1100; landlines are still in. The mishaps don’t bother The National’s bassist Scott Devendorf, though: “Oh don’t worry, entirely my fault,” he says, after the third attempt and a different phone number later. Unsure whether it was, really.

Scott is an interviewer’s dream: warm, reassuring and willing to talk from the off. Indeed, there’s a lot to talk about. Three years on from 2010’s High Violet – which topped the musicOMH writers’ albums poll that year – and The National are ready to go once again. Trouble Will Find Me, which was mastered only a few weeks ago and features a host of guest stars, from Sufjan Stevens to St Vincent, is due out in May. From there, the band set off around the world once again.

Yet before that, the band have been busy watching themselves on film. Lead singer and lyricist Matt Berninger’s brother, Tom, has made Mistaken For Strangers, a documentary around the band and premiering at Tribeca Film Festival. Filmed during the High Violet tour and while Tom spent “a good year on the road with us” as the band’s assistant tour manager, it’s much more than your usual tour film.

“The film was more than just about the band,” Scott explains. “It’s probably more about Tom and Matt’s brotherly relationship. On the tour, there was quite a dynamic, tri-bro atmosphere with Tom with us. It made touring for Matt much easier – it’s not his favourite kind of thing to do but Tom added a nice family dynamic to things.” Had being on the road for that length of time, especially with three sets of brothers being together, ever yielded any tensions? “Actually, we got along more than we normally should,” he laughs. “We’re funny and easy together.”

Yet earlier in the month there was another premiere, this time in Berlin. Here, they premiered Trouble Will Find Me live for the first time. “Berlin was scary,” says Scott. “The album was only mastered in March, so playing the songs live was interesting and challenging. We’re still trying to get a live version of the record together.” Live version? “The songs are a bit louder than on the record,” he explains, “but we’re still working out how to do the part of 96 recorded tracks.”

Scott begins to talk about the transition from recording the album to playing it live. It sounds arduous. “When playing live again, it’s like we have to re-learn everything,” he says. “We spend such a long time recording and we have to translate that to something live and work out how to get the new songs into the live show. It’s exciting and keeps us fresh, six albums in.”

It’s very easy to forget this is the band’s sixth album: it’s some 12 years since their eponymous debut, with Scott’s brother Bryan featuring on the cover inside a swimming pool, top off. It looks rather glamorous, Californian almost. Yet the album cover for Trouble Will Find Me, taken by Deirdre O’Callagan, is a real contrast; monochrome, with a girl lying down, trapped by a mirror cut to fit her face and forced to withstand her own reflection.

Like the Trouble’s artwork, a number of the songs reflect this sense of being trapped, as well as a degree of personal introspection, of looking into yourself. “I can see that,” Scott says. “A lot of the songs come from personal experience, but are non-autobiographical. For Matt, he is writing songs from a more personal perspective. We’re calling it our fun death record,” he chuckles. “I think there’s a sense that we’re all more responsible for our actions now. Matt has a daughter and he realises that actions have a consequence on those around you. It’s not karmic, but the album looks at how actions can affect those around you. It’s out to be grandiose but not scary grim-reaper.”

The track that best illustrates what Scott says is Graceless – one of Scott’s favourites to play – with emotionally direct lyrics such as “God loves everybody, don’t remind me, I took the medicine and now I’m missing” and “I am invisible and weightless, you can’t imagine how I hate this”. It is a brilliantly deceptive track, one that gradually creeps up on you: it isn’t until the end that you realise what an intense and compelling piece of music it is, largely thanks Scott’s brother Bryan’s drumming and, obviously, Berninger’s lyrics.

Another standout track is Humiliation, with the song’s persona meditating on what would happen if he died while seemingly on a night out: “If I die this instant, taken from a distance, they will probably list it down among other things around town.” In fact, after talking about the lyrics, Scott suddenly points out that Matt isn’t on the verge of doing anything rash. Thankfully.

Judging from the promotional photos, Scott seems by far the most happiest in the band. In one image, also taken by O’Callagan, he is stood looking directly into the camera, arms folded, with a toothy smile and wearing his characteristic orange aviator sunglasses. The other four, Berninger particularly, look decidedly more moody. “We’re cheery and always joking,” says Scott, “but in pictures we look so dour and doomsday. But there are some pictures with us all smiling; in the first round taken, with Matt’s brother in the room, we were all smiling. Whenever he’s in the room we’re always a lot more cheery.”

Still, this talk of death and one’s impact on others is especially apt, with what Boston and America have endured over recent weeks. The National are well known for their liberal politics; they’re big supporters of President Barack Obama and, during the 2012 campaign, the band – literally – played their part in rousing the Democrat vote out through performing at ‘get-out-the-vote’ concerts. They also warmed up the crowd for an Obama campaign rally in Iowa.

How has he found the last couple of weeks for his country? “It’s been totally crazy and totally intense,” he says, “especially in seeing it unraveling in a media frenzy. The immediacy of it all was overwhelming. It’s been interesting seeing how people react, and the bias in the media, with people rushing to judgement. “We obviously supported Obama and I really like his level-headed approach to this – Obama says he’s going to figure out carefully what happened. Just imagine what it would be like under [George W] Bush. But the other shocking thing was the front-line type situation in Boston. We were in Italy on tour during the London attacks in 2005 and this was a similar situation, with it taking place in a public space. So horrible. I don’t really know what to say.”

We move back onto the new album, one that takes a number of listens to grasp and fully enjoy entirely, with the majority of songs not having that instant punch that songs on High Violet and 2007’s Boxer have. “For Matt I think he means that more on a personal level, that it is more immediate,” says Scott. “But for me this album sits together much more cohesively. We like to try new things with each album and we make a conscious effort to try new things. High Violet had a concept behind it – it wasn’t a concept album, but we had these rules we wanted to try and follow. That’s the same with the new album with using these odd time signatures – for example Demons is in 7/4.”

Scott’s brother, Bryan, plays a particularly key role on the new album. While his precise, almost mechanical drumming has been ever-present throughout The National’s career, Bryan’s drumming here is often at the core of each track, driving it forward. Scott agrees. “When we write, Bryan likes to sit and compose and play along – it’s very interesting to watch in the practice space. But his drums here are deceptively fast: the BPMs are faster than any of the other songs we’ve done. The driving drum parts go up to around 180 BPM, which is fast compared to everything else we’ve done.”

But while the drums help drive the songs, we come back to the album’s complexity and how it may several listens to grasp entirely. Huge numbers of fans discovered The National through High Violet ; may those expecting something similar find Trouble Will Find Me difficult to adjust to? His response is detailed – and intriguing. “I do think some will think of this as our second album. Financially, it would have been better to do an album full of Bloodbuzzes. I mean, this has become a job and we can’t be completely obscure.”

He laughs again, then continues: “But we’re always thinking about the album when we’re working. It’s difficult because we recorded 30 songs for the album and we can’t leave any song in a way. We have to whittle this down from 30, then to 20, then 15 and then 13. For this album we tried synthesisers, but that didn’t work and we threw that away. We’ve been doing this now for a long time and changing keeps it interesting for us. We look for small advances each time. The new album may divide some – I mean it doesn’t have any Bloodbuzzes. It’s hard to say for us. We don’t think about that too much.”

Trouble Will Find Me is, without doubt, The National at their most confident. High Violet presented their big chance – and they took it. Yet Trouble Will Find Me is, to paraphrase guitarist Aaron Dessner, certainly their most complex set of songs, as well as their most simple and human. Indeed, the success has arguably brought something contrary to the album’s artwork and content: a sort of creative freedom and relief, what Dessner terms “free-wheeling”. Let The National continue with their small advances – and may we all benefit from them as a result.

Trouble Will Find Me is released on 20 May 2013 through 4AD. The National play a European tour in October and November, including dates at London’s Alexandra Palace on 13 and 14 November.