Pussycat Dolls: “It’s the next generation of Girl Power” – Interview 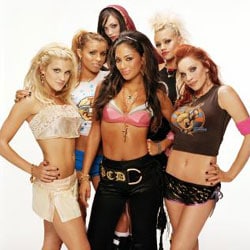 Pussycat Dolls have, in some form, been around for a decade. Originally a burlesque dance revue in LA, the girl group grew to be an A-list phenomenon featuring a range of guest celebrities – everyone from Gwen Stefani to Paris Hilton.

Now Pussycat Dolls have hit the top of the charts and are all set to launch clothing ranges, musicOMH caught up with them… for some fashion tips. Each of the six Pussycat Dolls has her own style. Kimberly is more of a rock chick, Ashley looks like a dancer out of an ’80s Billy Idol video, while Melody looks like a cheerleader with her cute piggy tails. But we can’t quite pin Spice Girls-fashion nicknames on them.

“We’re all different,” says Nicole Scherzinger, former member of Pop Idol band Eden’s Crush and now leader of the Pussycat pack that waves the flag of Doll Power. “It’s the next generation of Girl Power,” claims Nicole. Red-headed Carmit Bachar, the”Vida Loca” girl on Ricky Martin‘s world tour, offers a better explanation. “It’s essentially female power. It’s having a sense of strength and confidence and self-expression of who you are.”

When they claim the Spice Girls paved the way, I remind them that at least the Pussycats know how to sing. They crack up laughing, secretly glad, I’m sure. Of course, having a massive hit single like Don’t Cha, a duet with Busta Rhymes (“He was magic, very charismatic. He’s larger than life”), and an album boasting other collaborations with Will.I.Am of The Black Eyed Peas (Beep) and Timbaland (Wait A Minute), certainly helps. “It’s a powerful project,” says Carmit, “It’s been inspiring working with all of these different people. Everybody really believes in it, which just gives us more strength.”

Nicole is a bit more defensive. “People sometimes say, ‘Oh, so you just have the help of your label or those producers.’ We have all in one way or another,” she stresses, “been professionally singing, acting or dancing all of our lives, and this is something that we’ve been working towards.”

Produced by Rich Harrison and Ron Fair, PCD is a she-bang of a debut and the crowning moment for this underground band that started out in Johnny Depp’s LA club, The Viper Room. The PCD were born in 1995 in a dance studio in the LA garage of actress Christina Applegate, who suggested they perform at the famed Sunset Strip club. Soon after, they became the Thursday night opening act for the next six years, offering a sexy and fun modern-day cabaret.

“It’s having a sense of strength and confidence and self-expression of who you are.” – Pussycat Dolls’ Carmit Bachar on Girl Power

Their big break came five years later, when Stefani came to the show and expressed an interest in doing a guestspot. “I think she embodied what the PCD was about,” Carmit remembers, “Hercharacter and her energy can really portray that.” Other notable Pussycatshave included Pink, Christina Aguilera, Scarlett Johansson, Charlize Theron, Pamela Anderson and – surprise, surprise – Paris Hilton. But none of them measure up to Gwen. “We all have our favourites,” confides Nicole, “but we have to give it up to Gwen Stefani. If it weren’t for her, then we would not be here right now. We wouldn’t be on Interscope Records. Carmit and Gwen were friends. She brought Gwen to our show and Gwen brought her label.”

But it’s not only Gwen’s connections, but her wardrobe. “She dares to be different and that’s fashion. I love Gwen for that reason.” OK, so what do I have to wear to be a Pussycat? “You’re doing good!” Melody exclaims and the others agree. “It’s about feeling good about yourself in whatever you wear,” says Nicole. As Robin Antin, the creator of the Dolls, says, “Inside every woman is a Pussycat Doll,” and they can practice their moves and grooves at the Pussycat Lounge at Caesar’s Palace in Las Vegas, inaugurated by Desperate Housewives‘ Eva Langoria.

But before booking a plane ticket and making hotel reservations, be aware that seeing the band there is unlikely. They’re too busy now. “We have a group of dancers who pay homage to where the show came from, The Viper Room, and they do the shows nightly,” says Nicole, “We make special appearances, but we always tell people not to expect us there.”

“The most righteous chick is M.I.A. – she stands for so much that we really stand for” – Pussycat Dolls

If you want to feel close to the band, get a t-shirt. “It’s all part of the PCD phenomenon! We’ve got The Lounge, make-up lines, we’re going to have clothes out,” informs Melody. The band is also busy preparing for a world tour, promising a “high-energy show.” Citing Janet Jackson and especially Paula Abdul as among their influences, expect to see a lot of dance moves and Doll Power.

By the way, who best represents Doll Power? “The most righteous chick is M.I.A. She stands for so much that we really stand for.” Evoking a certain elegance and mysterious sexiness is what girl/doll power is about? “I’m going to write down what you said!” Nicole takes out her BlackBerry and inscribes my wise words. So when do I start as a Pussycat Doll?