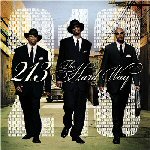 It’s the late 1980s; this reviewer is still in nappies while somewhere in California something very special is beginning. While Dr Dre and his cronies are close to taking the world by storm, much to the annoyance of the FBI amongst others, his stepbrother Warren G is plotting his own future. Along with friends Nate Dogg and Snoop Dogg, 213 is born. Now, over a decade later and with 25 million record sales as individuals, the trio have finally reunited to release The Hard Way.

Twist Yo Body instantly lets you know exactly what 213 are all about, not the gangsta rap that the trio have made their fortunes in, but straight up g-funk. The feeling is distinctly retro, but Absolutely brings a more modern feel. Snoop Doggs’s simplistic rap style complements the indecision issued by Nate’s chorus – “I’m not absolutely positive or absolutely sure.”

Each member of 213 has fallen the wayside of the “moral majority” in their lifetimes, being drawn into a world of gang-banging – and not the type that Internet sites make fortunes from. Keep It Gangsta just falls short of acknowledging this but along with the darker sounding Run On Up there is a definite glance back to the past days. Whether or not people want to accept it, “corporate America gotta deal with it”.

The Hard Way’s lead single Groupie Luv may well be misogynistic but it’s deliciously funky, and on the flip side the end of the song suggests that it’s the men who are being used by groupies. It’s an interesting argument, but I for one would rather just accept that it’s a fine track from a musical perspective. In any case Lonely Girl evokes a more sensitive side to 213.

The Kanye West produced Another Summer picks up on the essence of g-funk sampling from 70s Motown track Intimate Friends as well as utilising the tailor made vocals of Latoiya Williams.

Ups And Downs is probably the finest track on The Hard Way, particularly thanks to Snoop’s verse: “Yes it’s true that dreams can come true / If it happened to me, it could happen to you.” As if to capture the futility of hustling, that line is rudely interrupted by gunshots. Although the track is essentially straight up hip-hop it maintains the unique West Coast feel that has disappeared since the mid 90s. 213 are attempting to set the stage for the West to unite in a way that can be seen in America’s “Dirty South”.

Mary Jane is the obligatory ode to the “real sticky icky”, and is just about the most blatant way that Snoop could announce he’s smoking again. It’s a more forceful track than Coolio‘s I’m In Love With Mary Jane, but behind the veil of comedy the debate over legalisation smoulders.

My Dirty Ho opens with a crushing vocal demonstration with Nate Dogg showing off the skills learnt in the gospel choir. The lyrics don’t really blend with the haunting beat, until Warren G’s verse takes the tale into one with murderous consequences.

At times it seems the balance of The Hard Way is uneasy, threatening to explode into straight up gangsta rap. But then looking at the facts, 213 have simply gone back to their roots and in doing so Warren Griffin, Calvin Broadus and Nathaniel Hale have not only honoured their promise to bring a new 213 album to frutition, but have presented a brilliant album in the process.