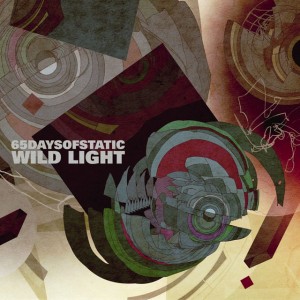 There’s a moment during the climax of Wild Light’s opening track Heat Death Infinity Splitter where the roaring, squealing feedback of guitar noise attempts to gatecrash the progression of the already-in-progress solemn synth-death march. There’s a short pause… and the synths charge back in like a boxer pumped up and responding aggressively from taking an unexpected shot to the head. They swamp the guitars and thunder on towards the conclusion. This is the sound of a band playing with their history, understanding their past, utilising it and trashing it.

65daysofstatic is not a band to stand still after all. 2004’s The Fall Of Math seems a long way off now, the post-rock/glitch mash that formed the likes of the towering Retreat! Retreat! is long gone. It would be easy to consider that Wild Light is the work of an entirely different same band (although Blackspots does, admittedly possess the same vigour and aggression of the earlier albums). Even 2010’s We Were Exploding Anyway seems like a distant planet by comparison; there’s nothing anywhere near as directly dance oriented to be found on Wild Light.

Instead, what this album represents is a band moving on, confounding expectations once again, and doing exactly what they want to do. Back in 2004 their rallying cry (albeit from a sample) was “this band is unstoppable” and that certainly seems to be the case. The inference might be different these days – the band is more an unstoppable force rather than a last gang in town – but at the moment there’s no immovable object threatening the band’s progression.

When the band provided a new soundtrack to the cult film Silent Running in 2011 it perhaps hinted at where they were heading next. Wild Light is to all intents and purposes an album in search of a sci-fi film to soundtrack. If Pirandello were an astronaut, he’d be floating through the cosmos to the sound of 65daysofstatic knowing he’d found the score for the play he can’t find. The pacing is cinematic, and the dramatic layering throughout is evocative and dense. These songs represent narrative passages, some joyful, some heart-rending, some breathless. Each one packed with character.

These compositions are the work of a band on top of its game. The Undertow for example is simply vast in scope. Scattershot drums populate a vast future city conjured up by some masterful synths, a mournful piano interrupts adding a moment of sadness and tension and a new angle, and as the climax builds on and on it feels as if the song may just burst. Even when the release the pressure, they don’t let the song explode and die, but segue into a more peaceful sequence. Focussing on the smoking crater left behind, surveying what such a climax might leave behind; understanding the consequences.

The unrelenting bassline and searing guitar tones of Sleepwalk City are foreboding to say the least, yet even such a lung bursting charge can be turned dramatically on its head, as at the mid-point it switches into a kind of uplifting mechanical symphony. What sound like quivering string surges are populated by metallic percussion, and suddenly the song no longer sounds like an escape from a ruinous city but an encapsulation of wonder. Taipei performs no such about turns but instead just swells with a kind of euphoric joy from the outset. Not every narrative needs a twist after all, sometimes it’s just as well to embrace the positives and just stay in the moment.

Unmake The Wild Light is quite possibly the finest thing 65daysofstatic have yet recorded. It’s so meticulously crafted and performed, slowly unfurling, dropping in a crushing bass break, and then allowing the guitars to soar onwards to a spellbinding conclusion. It could be classed as post-rock, but it is in essence a compositional masterclass, as is the entirety of Wild Light. In the days of MP3 tracks, 65daysofstatic have made what might be classed as an old-school album. It’s a story (almost cinematic), a journey, and far and away the greatest album they’ve done so far.