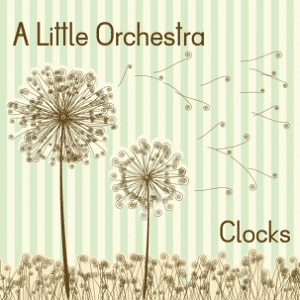 Sifting through the references on A Little Orchestra’s CV, you’d think they were some sort of indiepop supergroup. They’ve played and recorded with the likes of Darren Hayman, The Loves, Pocketbooks, Allo Darlin’ and Spearmint’s Shirley Lee. But this is no club for stroppy bassists or disgruntled lead singers; A Little Orchestra are the worker bees of the indiepop world, collaborating with the scene’s biggest names but avoiding the spotlight…until now.

Founded three years ago by the man behind The Pipettes, Monster Bobby – who remains on board as conductor and percussionist – the London-based, 10-piece orchestra have pulled in a few return favours for their debut album, and it’s littered with guest appearances from some of the acts they’ve played with along the way. The result is a gentle, summer afternoon in the country kind of record, with blissed out flutes, weaving violins and some irresistible melodies. It’s unapologetically nice and very much a mood record…but it you’re ready to be wrapped up in a fuzzy, homeopathic blanket of warmth, this will be right up your street.

Lead track Josefina is a woozing, folksy, bitter sweet tale led by the cut-glass vocals of Rachel from The Model Village. Darren Hayman pops up for The Permanent Way, a track he both sings and wrote. It’s unmistakably Hayman and could easily have been slotted into one of his own records – the Orchestra’s contribution being the strings that tie it together. As such it nudges at lazy psychedelia in a typically frustrated and lusty Hayman manner: “I want Julia in 1985, sheepskin coat, pattern tights. I want Julia and me to see a movie, one that makes me kiss her…”

Treacle You Should Probably Go To Sleep, written and sung by Simon Love of The Loves, is a fascinating little song. What starts with a Disney-ish hue, soon transforms into a sultry 60s number that owes as much to The Beach Boys as The Supremes. East Coast is Ballboy’s Gordon McIntyre’s gift. His awkward, nasal vocals sit uncomfortably among the flitting, delicate backing, but far from being unpleasant, it’s a welcome break from the syrupy twee of the rest of the album. Train Tracks for Wheezy, featuring Haiku Salut, is a wurlitzer of a song that picks up pace until it reaches a dizzying climax. Similarly, Clocks, Part 2, is an elegant instrumental written by Monster Bobby, with bursts of flute looping through and leading the direction of a song that, like so much of the album, has a bitter sweet undercurrent; an ever present menace nestling among the joyful strings. It’s a reminder of what this album should be all about; not the singers or the names they’ve pulled in, but the music the orchestra makes.

Just as you feel you’ve got to grips with A Little Orchestra and their friends, they throw a curveball in at the end, courtesy of Pightle 21, a tear jerking piano ballad featuring The Proctors’ Lisa Bouvier. with backing vocals from Monster Bobby, it’s completely at odds with the rest of the album. Which goes someway to summing up the record. Clocks is an odd little release, acting as a compilation of collaborations. It’s almost an advert for the indiepop scene; this is who we are, this is who we know and this is who we work with – and not many adverts sound this good.

A Little Orchestra MP3s or CDs

A Little Orchestra on Spotify