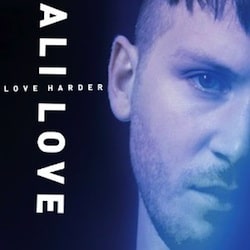 It’s fair to say that Ali Love has not had the best of luck. After rising to prominence with well-received singles like K-Hole and Secret Sunday Lover, he became probably best known for providing vocals for the Chemical Brothers‘ Do It Again. The Hoxonite was tipped for great things.Then it all went a bit wrong. His debut album, Love Music, was completed but never released, and he was quickly dropped by Columbia. Two years on, he’s signed to a new label, his new album is actually going to be released, but his name is now better known to the wider public as being actress Mischa Barton’s new boyfriend.

So if Love is to avoid ‘Jamie Hince syndrome’, where who you’re dating is more famous than any music you’ve released, Love Harder had better be exceptional. And here’s the problem – it really isn’t. It’s pleasant electro-pop in the mould of the likes of Frankmusik (remember him?) but it’s not going to change anyone’s world, by any means.

The main problem is that it all sounds so dated – even one of the better tracks here, Smoke & Mirrors, has that ‘pow-wow’ sound effect transported in straight from the ’80s. While some of the retro touches work well (Done The Dirty’s bassline, cribbed straight from Tom Tom Club), the overall impression is that this was all done more memorably by La Roux last year.

Love does have an ear for a catchy melody though. The aforementioned Smoke & Mirrors has a gloriously soaring chorus, and Show Me, despite an introduction that sounds disconcertingly like Van Halen‘s Jump, has a euphoric atmosphere that would make it a favourite on any dancefloor. Yet too often these tracks slip into the mediocre, with songs like Moscow Girl and Talk To Tokyo floating past the ears like aural wallpaper.

Love’s vocals are one of the problems – his falsetto lacks any kind of character to carry across a full album. It’s telling that one of the best tracks here, Done The Dirty, has a guest appearance from Lou Hayter of New Young Pony Club who provides a much needed contrast to Love’s rather colourless voice.

Then there’s the lyrics. Admittedly, this is always going to be a low priority on a disco album, but meaningless lines about “wandering child from a distant constellation” and cliches about “dreaming all the time… I know you’re mine” become wearying when not on the dancefloor.

Ultimately, there’s just nothing new or original enough here to grab the attention. It would sound pleasant enough in the background of a club, but with more exciting and pioneering work in dance music taking place elsewhere, it’s hard to see anyone getting too excited about Love Harder.