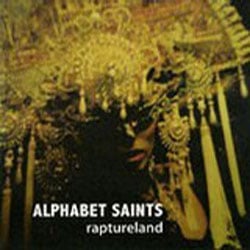 “It’s never sunny and pleasant in Raptureland, no. It’s spooky, overcast and dimly lit,” says ‘Shawns9′ in response to a Buzzfeed article entitled 20 Amazing Art Concepts of Post-Rapture Landscapes. He may have been commenting on last month’s failed premonition of the end of the world by Californian doomsday merchant Harold Camping, but the sentiment can easily be transferred to Alphabet Saints’ self-produced debut album. Googling anything Raptureland-like recently has been a rather tangled affair; results are a cross between salvation and despair. And that’s just the album reviews…

Raptureland the album is an ambitious project pairing Robert Christie and Hamilton Lee, both of whom have previous in terms of making, producing and critiquing music. Christie is also known as music journalist Chris Roberts, and Hami – as Lee is known – is a member of Transglobal Underground. They are both more importantly ex-members of obscure indie band Catwalk – who no-one in 2011 will remember – but which is how they happen to be co-writing and self-producing Alphabet Saints in the here and now.

So yes, ambitious, but that doesn’t mean that, like every other new band, they ‘hope to do well’. The press release sent out with the CD indicates lofty ambitions to be as good as Roxy Music or Suicide in their heyday. Even so, it’s impossible to ignore these two significant influences. They are worn prominently on the sleeves of every one of Raptureland’s 11 tracks beginning (European Girl) and closing (Carry on Marianne) with Bryan Ferry-wannabe gusto. Whether or not the pair quite pull off their stated intentions is another matter entirely, but the ideas are certainly there. They have obviously impeccable taste and a love for music.

Mixing synths with literature, and violins with an almost victorious sense of vitriol, the lyrics are, shall we say… diverse. Love song laments part sung, part read by Christie include the words ‘irksome’ and ‘accentuate’ – this is not your usual set of pop songs. It’s more wordily intelligent, perhaps overly so in parts. It must be quite tricky to leave behind your day job writer’s hat whilst keeping on your ‘music fan’ T-shirt when trying to create an album that is a sum of all your parts.

This album tries to be a lot of thing, perhaps in consequence: there’s Dexy Midnight Runners-like brass-pop styling (My Last Desire), there are jagged guitars (Raptureland), there’s atmospheric piano (The Map), there’s sunset chill (Fling). But it’s not as messy as all of that may sound; once you add in the ‘poetry,’ the album is almost a piece of performance art, though perhaps not an album destined to have tracks cherrypicked individually on iTunes.

Posh electro singer and poet George Pringle – remember her? – adds another layer to track Love Or Nothing, her voice making the despair-soaked song’s lyrics – “Scavengers hunted in packs/ Poison seeped through the cracks” – seem less scary and rather more elegant. Other tracks on Raptureland also feature some great vocals and harmonies by Lucy Castro, and they’re a good contrast to Christie’s dramatic swagger throughout.

Title track Raptureland cites that “we staked our lives upon it” and it’s clear that Alphabet Saints have put their soul into this offering. It may be an overcast and dimly lit world to which the album transports you, but the ambitious journey created for tuppence in a West London garage is filled with stories of lust, sin and cigarette-fume smothered vice. What more could you want for a snapshot of the end of the world?