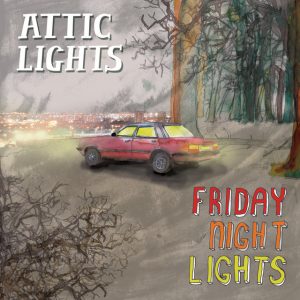 Fiction writers are often told to trim the fat. Make every scene add something to the story; have every word count.

Upcoming bands, no matter the level of hype, should heed the same advice on their debut. Better to deliver a quick suckerpunch than linger too long mon the same ideas, giving away your element of surprise. Attic Lights bring a few good ideas to the table, but they have trouble arranging them all together for a proper meal.

Some of the songs on Friday Night Lights could benefit from a bit of guidance. Songs from young bands, much like stories from young writers, often take a considerable amount of time to bring out what they’re trying to say. So with a little push, some of these could grow into better arrangements.

Dark Eyes is a perfect example – the first half of the tune is wasted with strummed chords and sparse piano, a backdrop for a lonely, disaffected narrator who extols, “You can send those dark eyes this way / If you like.” After 90 seconds, a warped little lead guitar line burrows into the space of the track, leading a lush section of purring voices and billowing guitars and keys. This is ended perfectly by a trailing piano section.

Why not start Dark Eyes with this full section, develop it nicely, and end with the lingering piano section? It would both bring the same feeling to the song and make it more powerful to boot.

Other creations are less salvageable. Nothing But Love and The Dirty Thirst try to pay tribute to pop country but sound mocking as singer Kevin Sherry puts the country crack into his voice for lines like “Woooorst of all” and “diiirty thirst” while the band backs him with a shiny, twangy riffs. Wendy drags on with the dreaded endlessly repeating chorus section, though it otherwise fares well.

God clumsily combines newer versions of pop-rock with older ones, suffering from its devotion to the genre. The song’s verses summon a pitch-perfect Blink 182, from the melody to Sherry’s whiny voice, while the choruses approximate a Bandwagonesque era Teenage Fanclub. Attic Lights here add nothing lyrically, musically, nor emotionally to this arena of pop-rock.

Attic Lights, however, lose some of their rigidity in the fresh sounding Walkie Talkie. But even at their freshest, the band seems resigned to paying homage to others that came before them. They rarely take a step out of their neat little country twinged pop-rock corner. This is a real shame because these songs belie a musicianship that can produce work much greater than this.

When they can relax and feel comfortable enough to step out of their comfort zone, Attic Lights will begin to flourish. Until then, they’ll always be second-rate versions of greater bands.