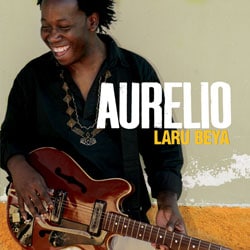 Aurelio is of Garifuna heritage, and his debut album explores a fertile hinterland between Honduran and Senegalese musical traditions. Aurelio is a protege of Youssou N’Dour, and takes up some of N’Dour’s expertly handled fusing of traditional cultural and global commercial imperatives. For the most part, Laru Beya (which translates as “by the beach”) is a relaxed, breezy and summery set, although beneath the surface it does have moments of touching melancholy too.

From the outset, Aurelio establishes an engaging mix of world rhythms with his own gentle but insistent guitar strum. Occasionally, such as on the opener Lubara Wanwa, reggae influences also seep through. This very much feels like a homely, gentle, lilting reggae, however – there’s little sign of the rebel stance that informed much of this music’s history. Elsewhere, Aurelio seems to filter his traditional rhythms though the prism of western influences. The brisk, enjoyable and energetic Yurumei mixes highlife and samba, but with its standout clavinet riff, it also seems to hark back to that unparalleled run of masterpieces Stevie Wonder made during the 1970s.

Some tracks, such as Weibawuya, move further into modern western stylings, with the infectious rhythms being bolstered by chants that seem surprisingly close to rapping. All this is done with subtlety and taste, however, and Laru Beya never strays too far from its comfortable, naturalistic template.

Perhaps the album’s highlight comes with a drift even further into gentle, folk-tinged acoustic territory with Mayahuaba. It’s the most transparently melodic statement on the album and is as gentle and touching as a lullaby. The introduction to the subsequent Tio Sam seems like it might follow suit, but it eventually explodes into glorious rhythmic vitality.

For all its undoubted life and energy, Laru Beya perhaps seems a little unassuming, possibly even lightweight at times. It doesn’t quite have the effortless mastery of some of the highlights of a currently crowded world music marketplace (recent releases from AfroCubism and the much missed Lobi Traoré spring to mind). Still, that should not detract from its abundant qualities. It successfully establishes an effective common ground between the musical traditions of Africa and the Caribbean. It’s also a sweet, appealing and vibrant set delivered with a satisfying combination of energy and sensitivity.