Balance And Composure – The Things We Think We’re Missing 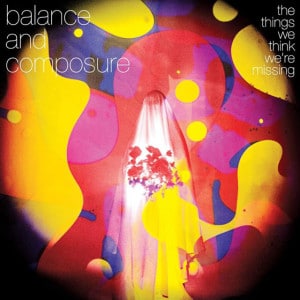 Despite a recent influx of think-pieces on what it means to be “alternative rock” in 2013, you always know an alternative rock album when you hear one: too loud, angsty, or emo to be Top 40, and still laden with enough hooks not to be experimental, sounding great blaring on the car radio, windows down. And the best alternative rock records transcend Foo Fighters and Red Hot Chili Peppers-level cheese and instead channel the singer-songwriters who turn the personal into the interpersonal, from Bruce Springsteen to even Nirvana‘s Kurt Cobain. 2013 has seen some great alternative rock records, from the emo and pop punk (Paramore’s self titled record and The Wonder Years’ astounding The Greatest Generation) to the post-grunge (Daylight’s Jar).

Immediately, The Things We Think We’re Missing hooks: opener Parachutes is an all out assault of guitars, drums and deep-throated screams from singer Jon Simmons, while Lost Your Name is a bit slower but no less quiet, Simmons still struggling to keep sane. Overall, Simmons is almost The National’s Matt Berninger if you replace red wine and a suit with cheap beer and flannel, respectively. Simmons is not explicitly concerned with the pressures of upward mobility like Berninger (hence the working-class aesthetic he evokes), but like the equally insane Berninger, he’s concerned with the pressures of adulthood with a capital A. His maturity and concern for propriety in contrast with his instability shows on the comparatively quieter Back Of Your Head, one whose loud-quiet-loud dynamic recalls not necessarily the slow-burning emotional intensity of a Berninger but the sudden, throaty yells of a Kurt Cobain or a Frank Black. Yet, Balance & Composure’s swirling, borderline shoegaze guitars separate the band from pure punk. They’ve manager to take a My Bloody Valentine-associated sound and, by combining it with a more traditional emo aesthetic, make something their own.

What’s also impressive about The Things We Think We’re Missing is that despite its consistent loudness, it still manages to maintain a beautiful melancholic sound throughout. Fourth track Tiny Raindrops, which Simmons has said in interviews is an image of something that’s worse to come and metaphorical of him in relationships, is the epitome of Will Yip’s excellent production on the album. Yip treats Simmons’ voice exactly right: audible, not dominating, and just emotive enough to not only express words but become yet another instrument in the mix.

And then there’s the true standout on the album: lead single Reflection. It’s both the song with the most radio hit potential and one of the best songs of the year. While most of the album’s songs start with a soft introduction immediately giving way to a heavy riff, Reflection first gives way to a softer, more lo-fi sound before the song absolutely explodes into a the catchiest heavy riff in 2013 since Kylesa’s Quicksand. “You said you’d come when you’re ready,” sings Simmons. He’s talking to an apprehensive girl, but you kind of wish he was talking to you. Because you’re ready for The Things We Think We’re Missing. It’s yet another one of those albums you didn’t know how badly you needed.