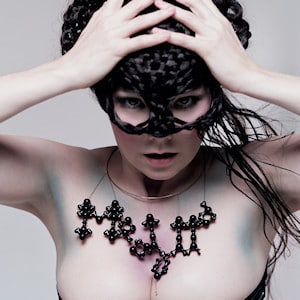 It’s been well documented that Björk’s fifth solo album – and first since 2001’s Vespertine – is her “vocals only” album. And given Björk’s penchant for samplers and the avant garde, it would seem that Medúlla is all about experimenting with that most quintessential attribute: her voice.

And experiment she does. Opening track Pleasure Is All Mine sets the decidedly eerie tone for the rest of the album by using familiar (or unfamiliar) vocal sounds, regurgitated via a sampler as beats. Strange vocoder effects also contribute to the “uneasy listening” experience, such as Where Is The Line, in which the Icelandic Choir deliver a one-note choral accompaniment reminiscent of ’60s composer John Tavener, against a background of distorted vocal samples.

Despite its voice-only premise, Medúlla shows off a mile-wide scope of influences. Second track Show Me Forgiveness is genuinely a capella with a folk-like motif, and a medieval-sounding choral style is employed in Vökuró. By contrast, Who Is It is the closest Björk gets to pop on this record, while Oceania (performed at the Olympic opening ceremony) carries on where Venus As A Boy left off.

Interestingly, given Medúlla’s range of musical influences, Björk’s own voice remains an unwavering constant. Though utterly unique, there is a surprising lack of diversity in Björk’s delivery – strange for someone so musically experimental. So much so, I’m pretty sure she could sing Big Time Sensuality over some of these tracks and the effect would be no different to what’s already there. Consequently, and perhaps unsurprisingly, the tracks that feature multi-layering of her own vocals (Öll Birtan, Midvikudags) can feel like OD-ing on essence of Björk.

Elsewhere on Medúlla, the venture into avant garde verges on unlistenable, particularly the speaking-in-tongues on Ancestors and the deliberately off-key harmonies of Submarine.

Many descriptions of this album will include the word “challenging” and this one is no different. There is no doubt that Björk has challenged herself and intends to challenge listeners – why else would her lyrics and songtitles be black on a black background, meaning that readers have to squint against the light to read them? Ultimately however, what Björk has presented us with is an album that is easier to admire than to actually enjoy.