The Black Ryder – The Door Behind The Door 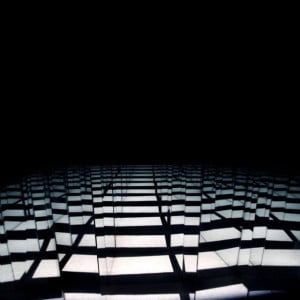 Formed by a couple of ex-Morning After Girls members – Scott Von Ryper and Aimee Nash – The Black Ryder lean more towards The Raveonettes and Mazzy Star territory than, say, Black Rebel Motorcycle Club like their ex-band, and not least because of Nash’s gorgeously wispy vocals so reminiscent of Hope Sandoval. Her looks are similarly captivating; in fact, The Cult’s 50-something frontman Ian Astbury found himself so besotted with her beauty that he went and married her in Los Angeles during a 2012 US tour when the Aussies were supporting the goth legends. She Sells Sanctuary indeed.

A debut collection, Buy The Ticket, Take The Ride. surfaced in 2009, and has become somewhat of a cult in itself, an elusive album for collectors, even. There was the occasional rockier number present such as To Never Know You but the effort largely focused on the duo’s love for slow-paced, ethereal cuts like Burn And Fade, where guitars chimed against a shoegazey backdrop of beauty and the new album follows on in this vein.

For the full effect of The Door Behind The Door, simply close your eyes and imagine you’re in a hazy dream, floating through a sea of swirling mist, the ocean gently lapping below your gliding body. The gorgeous Seventh Moon fits the vision perfectly early on, with Nash’s hushed tones carefully caressing you through minimalist yet powerful bliss, tinged with just the slightest hint of gospel courtesy of sublime backing vocals. Acoustic pluckings then open The Going Up Was Worth The Coming Down for another cracking number; this time Von Ryper takes the lead vocal throughout the atmospherically electric cut where the band’s liking for simple yet stunningly effective guitar playing excels.

The otherwordly experience continues with the brilliant Let Me Be Your Light as slow, swirling psych burns beneath Nash’s almost whispered vocals and subtle yet perfect electric guitar strumming before the song disappears in almost gothic, distorted bell sounds. But then, enter the amazing Santaria: minimalism reigns once again for six minutes of sheer magnificence, the constantly ascending/descending guitar arpeggio reverberating into fruition alongside basic, slow pounding drums and a gentle sheen of shoegaze. It’s Von Ryper on lead again but Nash’s backing vocals complement them beautifully before a wall of electric guitar fuzz and underlying melodic delights take over to lead the track to its superb conclusion.

Throwing Stones is another cut that makes a significant splash, echoing acoustic guitars marry with Nash’s vocals: “let your love shine on if you want to be free”, she coos before another touch of gospel appears, sounding something like a remixed, toned down Primal Scream track with a guest vocalist. All That We Are delves deeper into psych sounding synths against more acoustics and then Until The Calm Of Dawn tinkles into existence like a gothic fairytale from the mind of Tim Burton where warm strings create atmospheric perfection.

“The whole idea is that it is a journey where, as a track finishes, one door might lead to ascension, whereas another may be a descent,” claims Von Ryper about The Door Behind The Door. Where all these tracks lead to, though, is closer (Le Dernier Sommeil) The Final Sleep and despite sounding utterly beautiful, at 12 minutes it’s way too long and dampens the overall effect of the album hugely, feeling rather out of place. The title says everything, really: it’s all about tear-jerking, see-sawing, highly emotional strings and its funereal presence is overwhelming, unless you actually enjoy a visit to the crematorium for a service. Perhaps it won’t matter, and the brilliance of what goes before it will carry it home, and people will see the light before the door closes as, final track aside, this is as close to blissful shoegaze perfection as is possible.

The Black Ryder MP3s or CDs

The Black Ryder on Spotify