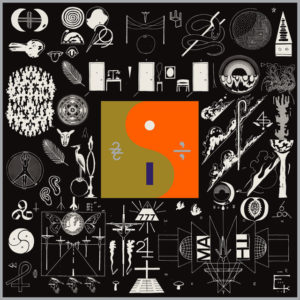 A decade on, and we’re a long way from that log cabin now. When Justin Vernon first emerged into the limelight as Bon Iver, his backstory was almost as compelling as the music contained on For Emma, Forever Ago. As everyone now knows, Vernon retreated to a remote log cabin in Wisconsin after a band break-up, relationship trouble and illness, and proceeded to write and record his debut album. From that small acorn grew fame, a friendship with frequent collaborator Kanye West and eventual success for his follow up, self-titled album at the Grammy Awards (spawning the memorable internet meme ‘who is Bonny Bear’).

At first glance, Vernon’s third album, 22, A Million, seems to be the work of someone who’s gone ever so slightly mad. The cover art is full of impenetrable symbols, there’s a tracklisting seemingly created by somebody who’s only just discovered what fun using the Wingdings font can be, and the songs themselves are frail, fractured affairs, soaked in vocal effects and, at times, you’ll think your headphone jack is faulty as the sound crackles and judders, seemingly on the verge of cutting out completely. Put it this way, there’s not much chance of Birdy covering 21 M♢♢N WATER or 29 #Strafford APTS anytime soon.

However, after a few plays, 22, A Million begins to make a beautiful kind of sense. It’s the natural evolution of Vernon’s sound, back from when he experimented with a vocoder on the final track on the Blood Bank EP, Woods. And the songs themselves, once they’re stripped of all the vocal trickery, are as heartbreaking as ever.

Although his lyrics are typically abstract, Vernon is a master at conjuring up feelings of loneliness, heartbreak and alienation – even when his voice is being mashed to pieces by the Messina (a piece of software created by Vernon’s engineer Chris Messina), there’s no disguising the vulnerability on display. It’s a similar trick that Kanye West used on 808s And Heartbreak, and it’s just as effective here.

So, the opening track 22 (OVER S∞∞N) begins in minimal fashion, with a looped synth line and some auto-tuned, sped-up lines of “it might be over soon” but slowly blossoms over the course of its three minute running time into something lush and rather beautiful. 715 CRΣΣKS is a throwback to the aforementioned Woods, simply Vernon singing a cappella with his voice mangled into something almost unrecognisable. It’s difficult to actually work out what he’s singing, but the soul and pain in his voice is palpable.

The more conventional moments, such as they are, work equally well. 666ʇ is just magnificent, waves of crashing drums over an aching guitar line and some warm horns – on an album that’s so dominated by studio trickery and computer effects, it’s a reassuringly human song. On the other end of the scale, on 10 d E A T h b R E a s T ⚄ ⚄, the distorted, pulsing synths and beats threaten to overwhelm Vernon’s voice, but the emotional impact remains – it’s almost the sound of a man struggling with demons and just about managing to come out on top.

At times, all the vocal trickery can become a bit too much, and there are moments, as on the noodling sax outro of 21 M♢♢N WATER where you begin to wish he’d just get on with things. Yet there’s a frail humanity to Vernon’s music, which no amount of processing can wash out. And when it hits, as on the wistful Fionn Regan sample on the closing 00000 Million or the breathtaking piano introduction to 33 “GOD” you know that this strange, beautiful, willfully obtuse album is one that you’ll want to live with for a very long time.