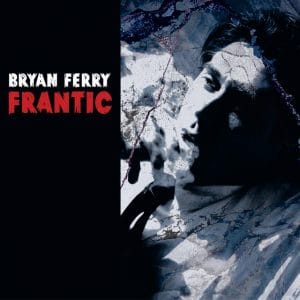 Frantic is a curious album on first hearing. One could almost accuse Bryan Ferry of being so frantic to get some new original material out (the last such album was in 1994) that he grabbed whatever diverse musical experiments he had on the go, threw them all together, and hey presto. The styles are so diverse, and the percentage of original material low (roughly half the tracks are covers), so first impressions are doubtful. Ferry singing Bob Dylan, displaying his ‘superb harmonica skills’? Ferry singing country swing? Gracious.

In fact while some of these experiments are more successful than others, there is a lot to enjoy in this album and the new tracks are great – sweeping love songs such as Cruel (the sound harking back to very early Roxy Music), Nobody Loves Me and the first single, Goddess Of Love, given the full production treatment by Rhett Davies. The latter two songs are co-written with Eurythmics‘ Dave Stewart, one of a number of collaborations with notable musicians past and present. I Thought, perhaps the most original track on the album, pairs Ferry with Brian Eno as co-writer, backing vocalist and keyboards. It’s a quirky but haunting song of a lost love, with a long instrumental outro featuring the harmonica. Radiohead guitarist Jonny Greenwood guests on Hiroshima, a song inspired by the classic 1959 Alain Resnais film, Hiroshima Mon Amour.

Interestingly the guitar work that really stands out, and which is a sheer delight, is that of Chris Spedding, who played with Ferry in the ’70s. This is particularly so on Nobody Loves Me and the stand-out track Fool For Love, which is prefaced by the 36-second Ja Nun Hons Pris, a medieval love song possibly written by Richard the Lionheart (not that he was a great one for the ladies). Is this Ferry cashing in on the faux-medieval fashion, having ransacked practically every other genre for the album? In any case it’s a great song, if not exactly cutting edge, and enhanced by the soprano of Mary Nelson (recently seen starring in The Marriage of Figaro at ENO). She also provides shimmering backing vocals on the atmospheric San Simeon.

And the covers? Well once you get over the shock of Ferry singing Dylan they’re OK, but frankly Dylan does it better – and hearing Ferry sound almost like a lightweight Elvis Presley on Don’t Think Twice, all quivering emotion but without the warmth of tone, is plain odd. Leadbelly‘s classic Goodnight Irene is dull, but The Don Nix blues standard, Goin’ Down, is fascinating, with edgy guitar and harmonica backing that silky voice at its seductive best.

The final impression is of an album that’s rather disjointed, not overly original, but hugely enjoyable. Lie back and let those luscious love songs wash over you…