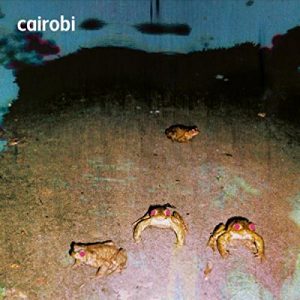 Around a decade ago, five multi-nationals came together and formed a band in London by the name of Vadoinmessico, after meeting at a British music college. Producing a brand of music tagged ‘fizz-pop’ and ‘experimental freak folk’ hardly inspires you to jump in the Tardis, rewind time and check them out if we’re honest, but their debut album Archaeology Of The Future did attract some critical acclaim when finally released in 2012.

The members of the group came from all over – the UK, Italy, Austria and Mexico to be precise – with the band’s name coming from spending time in a chilly London flat, yearning for the hotter climate of South America – it literally means ‘I am going to Mexico’. A few years later and all but drummer Joe White remain in the band’s new guise of Cairobi. At least it halves the syllables over the original mouthful of a name.

Cairobi blend multi-cultural upbringings into their music, with influences spanning from krautrock, African polyrhythms and Latin American folk; you can hear snippets of all of them at various points and comparisons have been drawn with Animal Collective. An early EP from 2014, Distant Fire, echoed the earlier experimental side of the band though, in particular Zoraide, the EP’s lead single, headed up this path, and was even used for a Halfords TV advert.

Zoraide is the only cut from the EP to make the eponymous debut long player, and as intriguing as it is, its experimentalist core seems a touch out of place amongst the main vibe of the album. Its shuffling addictive African beat mixes with bursts of guitar and vocals to create something definitely unique whilst perhaps not being something to draw repeated plays.

Of the 10 other tracks on Cairobi, two are instantly forgettable. Opener Habitat is 30 seconds of jazzy tinkling that would probably serve better as elevator music, more of a curtain raiser than anything else, and the bubbling one and a half minutes of Germ is just blips and bleeps that sound more like an early 1980s ‘ZX81 with 16kb RAM Pack’ computer game when home personal computers were – hard to believe now – about as common as Halley’s Comet, with the most exciting game being two white sticks either side of a ‘net’ with a dot bouncing between them.

Elsewhere, though, things become much more interesting as the band’s direction heads toward the psychedelia of acts such as The Flaming Lips, POND and Tame Impala. Single Lupo has a stop/start structure that grimly holds on to the experimental side of the band like a dog refusing to let go of a bone but the dreamy psychedelics underpinned by a bouncing bassline are captivating – a song most indicative of the sleepy medicine-induced haze singer Giorgio Poti had found himself writing songs in when dealing with repetitive migraines. Gristly Words also twangs along in an experimental state in part but this is offset by a clearer direction despite stuttering vocals.

There’s some jazzy, random percussion throughout Ghost as the European influences take hold, particularly via keyboards but the album’s best two tracks stand out considerably from the rest. The swirling psychedelia of From Some Other Planet’s Sky is compelling, its constant chugging guitar riff casting hypnotic qualities over the listener whilst warped guitaring bends this way and that. Saint, though, is enormous. Swamped with a mesmerising fuzzy guitar line, this time influences sound more Indian then anything else as the swirling vocals meet clashing cymbals for an excellent track absolutely drenched in narcotic-induced psychedelic aura.

With the band still retaining a healthy slab of the experimental side of early days, results can be a little mixed, but with more concerted efforts to veer toward more recognisably structured numbers becoming clearer, Cairobi are beginning to approach territory that is likely to garner a lot more interest. But please, chuck that ZX81 out the window guys, like everyone else did 40 years ago, 16kb RAM pack ‘n all.