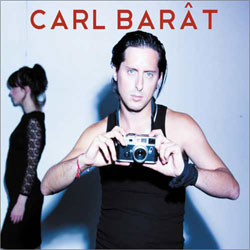 It’s been six years since The Libertines‘ self-titled hurrah signalled the moment that the utopian vision of Albion ceased to sail on course and ran aground instead, with the occupants manning the lifeboats and fleeing its sinking carcass. Where those lifeboats floated to demonstrated just how the members depended on each other. Yeti (John Hassall) disappeared without trace, and Babyshambles appear to trade solely on the adulation that Pete Doherty receives. That leaves Dirty Pretty Things, who – on 2008’s Romance At Short Notice especially – sounded like a band who were in it purely for a break from an epic FIFA session. Given how Pete Doherty’s solo effort was met with critical ambivalence limited sales, can Carl Barât’s first album redress the balance?

She’s Something, with its staccato melody, could be a distant relative to Jarvis Cocker‘s Black Magic, and while it could hardly be called earth shattering, it is at least an improvement over the misfiring opening tracks. But having improved maters via She’s Something, the downbeat, lilting Carve My Name regresses the album to its faltering beginnings.

It’s an indictment of the album that average-at-best single Run With The Boys is a highlight. If nothing else its upbeat nature puts the kibosh on the downbeat first half of the album. The Fall brings things back into check however, with its talk of “evil smelling bores” amid a tune that wouldn’t be out of place as background music for a cinema adaptation of a Dickens novel.

Then – frustratingly – the record pulls out So Long, My Lover, a sweeping pop epic with a chorus straight out of the Ray Davies school of songwriting. The marked improvement in material then extends to the end of the record via What Have I Done, Shadows Fall and Ode To A Girl. The issue here though is that even with the better material, if you know that Neil Hannon as had input into the album’s creation you can’t help but wonder what the man by himself would have done with it.

Overall then, a missed opportunity to reverse the underperforming post-Libertines side-projects, something that was made all the more necessary given their searing Reading performance. With its insipid, limp first half this is most certainly not the record to do it. The listening experience is made all the more irritating and frustrating given the sudden improvement in the final third of the record, but no part of it will ever be described as life changing or world-shattering. It’s so forgettable and disposable it might as well have been released on flexi-disc. Those lifeboats are going to be swilling about in the ocean for a fair while yet.