Cher – Closer To The Truth 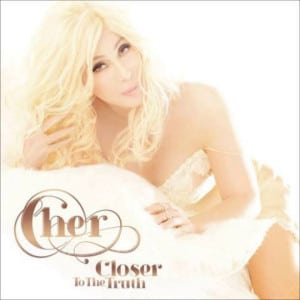 The artwork for Closer To The Truth, Cher’s first studio album in almost 12 years, is more apt than its creators probably realise. It depicts our diva lounging on a white pillow wearing only flesh-coloured lingerie, one strap very deliberately hanging from her shoulder. Like the album title it suggests a rawer offering from one of pop’s most flamboyant performers, perhaps something akin to her self-released and largely self-penned 2000 album Not.Com.mercial, which retreated from high-octane dance and indulged a long-held love for bluesy folk.

A second’s consideration, however, reveals just how misguided that inference is: the image is heavily airbrushed and saturated in a blindingly high contrast while Cher’s blonde wig looks like it’s been pinched from Burlesque co-star Christina Aguilera. The ‘truth’ presented here is a carefully constructed façade – a fitting analogy for Cher’s six decade-spanning career. Her music has tended to be undemanding (and frequently hugely enjoyable) kitsch, revealing nothing of the artist and relying on her unmistakeable voice and sassy, straight-talking persona for much of its appeal. Most listeners may know little about what makes the 67-year-old tick but they also don’t care – the illusions are part of the charm (as attested to by the rather misleadingly named Farewell Tour, which everyone including Cher seemed to understand was anything but.)

No-one, then, expects anything from Cher other than enjoyable music. Yet it’s still disappointing when Closer To The Truth kicks off with the generic EDM of Woman’s World, a song which suggests producer Paul Oakenfold hasn’t heard any music since 1999. Indeed, it could have been lifted from either of Cher’s dance albums of the period, rehashing as it does a recipe which had already become stale by the time of her ‘retirement’ from music. Part of the earth-shattering success of Believe lay in its brave novelty, but by the dying moments of exhausting second track Take It Like A Man, a wannabe gay anthem replete with DOA innuendo and copious use of vocoder, any hopes of Closer To The Truth employing a similarly revitalising daring are dashed.

The decision to cover Dressed To Kill, the failed lead solo single of The Ordinary Boys’ Preston, offers an intriguing prospect but in reality it instead seems as though everyone involved worked overtime to make the song as formulaic as possible. It’s stripped of its compelling Siouxsie & The Banshees sample, slathered in oppressive vocoder and transformed into the kind of dead behind the eyes dance ‘anthem’ which relies on misguided notions of camp for its clout. Red, meanwhile, wins points for sounding like it’s from this decade but it’s hard to feel enthusiastic about a track which feels like a middling Nicole Scherzinger single.

The first seven of the eleven tracks here aim for the dance floor and while they are rarely inspired, they’re not all failures. The melancholic Balearic house tinges of My Love underpin a refreshingly subtle (and vocoder-free) vocal performance from Cher while the P!nk-penned I Walk Alone zips along on a beat given a texture sorely missing from much of the album by the presence of a banjo (a trick which recalls Love Spent from Madonna‘s MDNA, an album about which Cher memorably and hilariously tweeted ‘WTF is MDNA?’) For the most part, however, these dance excursions feel like they are going through the motions, aiming squarely for the loyalties of a gay audience who are presumably expected to swoon at the usual tropes. The lack of invention and nuance mean that the album becomes draining, akin to being shouted at in monotone for 40 minutes.

A closing streak of songs which return Cher to her ballad-belting glory days provide palpable relief. I Hope You Find It, a cover of a pre-twerking Miley Cyrus song, invokes the Diane Warren-penned Cher classics of old and soars effortlessly in comparison to the laborious grunting of much preceding it. Another cover, of Nell Bryden’s Sirens, is infused with the same spirit and its 9/11-inspired lyrics are easily the most accomplished (and moving) here.

In contrast to these retro stylings Favorite Scar, written by the production team behind Little Mix’s Wings and Professor Green/Emeli Sandé’s Read All About It, is a contemporary delight which borrows the ubiquitous vocal hook from Kings Of Leon’s Use Somebody and unfurls without melodrama or bombast over an addictive military drum beat. The only slight misstep comes with closing track Lie To Me, another P!nk co-write and strong song but one which drowns beneath a production which is seemingly straining for a self-consciously Cher rock ballad sound.

It seems an odd statement after over a decade without any new music, but Closer To The Truth is very much business as usual for Cher: a few songs that will serve as appealing singles and push the inevitable (and already announced) tour surrounded by schlock which few beyond the die-hard fan base will ever want to hear again. It seems futile to dwell on missed opportunities because, as noted earlier, Cher has never really been about the music. A functional album it may be but Closer To The Truth does nothing to puncture the illusions which so many love about Cher and that, ultimately, may be the best anyone can expect at this point.