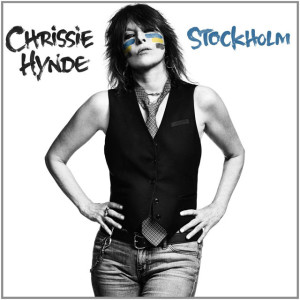 After 36 years, it seems that The Pretenders‘ name has been put to rest. For, astonishingly enough, this is actually Chrissie Hynde‘s debut solo album, although you could make a fair case for arguing she’s been an solo act in all but name for some years now – the last Pretenders album in 2008, Break Up The Concrete didn’t even feature long-term drummer Martin Chambers and was simply Hynde with some session musicians.

As such, Stockholm won’t sound like a particularly big departure for one of the more iconic women in rock. It’s mostly radio-friendly rock, co-written and produced with Peter Björn & John‘s Bjorn Yttling, who adds a downbeat Scandanavian touch, although there’s few moments as gorgeously devastating as his work on Lyyke Li‘s most recent album. While it’s all very polished, listenable and enjoyable, it’s impossible not to yearn for a bit of grit – a strange thing to wish for, considering this is Chrissie Hynde were talking about.

The cynical, bouncy throb of Dark Sunglasses is one of the early highlights, an acerbic swipe at a former love who’s sold out with “a pension plan, and your name’s on the insurance, so you can drive another woman’s car”. It’s set to a bouncy power-pop riff that simply zips along and a chorus that will take up permanent residency in your brain.

The trouble with Stockholm is that there aren’t enough memorable moments like that. Much of the album sounds nice and pleasant while it’s on, yet after multiple listens there are few tracks that really stick in the brain. Down The Wrong Way though does dramatically come alive with a typically brilliant lead guitar riff from Neil Young – he successfully brings out the rawness that much of the album is crying out for.

Another guest musician, if a rather surprising one, is that of tennis legend John McEnroe, who contributes some howling guitar riffs to A Plan Too Far. He’s surprisingly good, even if, at times, the slightly over-showy solos threaten to overpower Hynde. McEnroe does add a bit of personality though, which is something that the second half of the album seems rather to lack.

Songs like House Of Cards and You’re The One are engaging enough, but are, in essence middle of the road plodders that don’t leave much of an impression. Hynde is at her best when she lets some of the darkness in – like in the accusatory swagger of the aforementioned Dark Sunglasses or the eerie, almost chilling ballad Tourniquet (Cynthia Anne). Now and again though, there comes a lovely, swooning pop song like the string propelled Sweet Nuthin’ which, while not quite being equal to the glory days of The Pretenders, is still a reminder of Hynde’s huge talent.

Of course, with a career spanning three decades and producing songs of the quality of Brass In Pocket, Don’t Get Me Wrong and Back On The Chain Gang, Hynde has nothing left to prove, and she sounds like she had a ball recording this in Sweden. It doesn’t have the timeless quality of her classic material, but it’s good to have her back nonetheless.