Chvrches – The Bones Of What You Believe 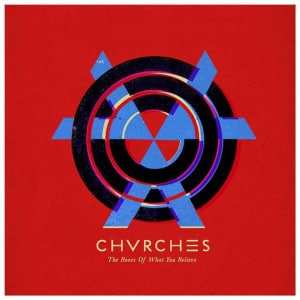 n little over a year Chvrches have become one of the most talked about and hyped bands around. Formed by members of Aereogramme (Iain Cook) , The Twilight Sad (Martin Doherty) and Blue Sky Archives (Lauren Mayberry), Chvrches sound unlike anything any of the members have done before. No time for those introspective indie tones here, The Bones Of What You Believe is, on the surface at least, an album full of dynamic, dance fuelled synth-pop, and the hype is justified.

Dig a little deeper however and there’s catharsis, pain and emotional turmoil lurking just below the surface. This juxtaposition of euphoric dance hooks and intense personal reflection is of course not particularly new – Zola Jesus is quite a dab hand at injecting turmoil into danceable tunes and Gary Numan‘s disconnected vibe was often married to some serious floor fillers. The trick is to find a perfect balance, and Chvrches frequently achieve this on their debut. Those who care not to pay much attention to lyrics might just find themselves bawling on the dancefloor without quite knowing why, as these earworm tunes form a perfect delivery system for the heartbreak (and occasionally a little vengeance) contained at their very core.

The Mother We Share is a perfect encapsulation of what they do so well. With electro stabs, “oh, oh, oh” vocal ticks, quirky keyboard hooks and a chorus coated in what appears to be sugar, it’s a pop masterclass. Lyrically it’s an emotional mess: “When it all fucks up, you put your head in my hands, it’s a souvenir for when you go,” sings Mayberry in the style of an ’80s pop-starlet. It turns out that the chorus isn’t coated in sugar, but powdered anti-depressants. “We’ve come as far as we’re ever going to get,” she sings at the start. For all the pop exuberance on display, this is a song that realises that the end is here.

If The Mother We Share is a reluctant acceptance of a relationship going nowhere, then We Sink is the unhinged revenge. Still wrapped in pumping disco candy, it’s quite easy to miss the anger driving the song forward. “What the fuck were you thinking… I’ll be the thorn in your side, till you die” suggests that the hurt is raw and that scores are to be settled, but at least there will be tunes. Gun takes the revenge fantasy further: “You had better run from me… cos I am going to come for you with all that I have. I am going to break you down to tiny tiny parts.” The dainty ’80s keyboards and synths have more than a bit of Harold Faltermeyer about them, but none of them suggest that this might be a danger zone.

Tether sounds like a happy coming together of Sad Day For Puppets and M83, but is of course anything but. All dreamy drifting textures initially, Mayberry finds herself incapable of saying it’s over, and then as the realisation hits that it really is over, a frantic euphoric synth cuts in. It feels like an offer of freedom. Lies follows and takes Numan’s electro blueprint, realises that there’s little that can be done to improve things and sticks to it rigidly. The pulsating Science/Visions is a thundering and claustrophobic industrial electro nightmare, counterbalanced by the sweetened cutesy pop hop of Lungs.

For all the poptones of the majority of the album, it wraps up in a fairly desolate manner with You Caught The Light, a subdued synthscape populated only by the vocals of Iain Cook and Martin Doherty. It is perhaps the first time that the band truly wears its heart on its sleeve; there’s no more hiding behind hi-energy synths and obscuring the truth with sudden euphoric breaks. Right back at the start, Mayberry sings “And if I told the truth, I will always be free” – this is Chvrches’ freedom, their truth. It’s in all these songs, but this is where it is closest to the surface.