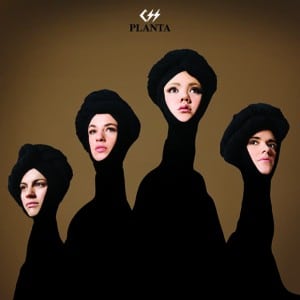 Cansei de Ser Sexy‘s self-titled debut album is eight years old. Eight! A throbbing collection of indie-tinted dance-pop, it spawned a succession of irresistible singles, among them Alala and the triumphantly timeless Let’s Make Love And Listen To Death From Above.

Greatness beckoned, but it also – perhaps conclusively – proved elusive: follow-ups Donkey and La Liberación lacked the vim, verve and vigour of their beloved forerunner, each meeting with a lukewarm reception both critically and commercially. With each passing year, CSS’s first full-length effort looked more and more like a lucky strike; a classic case of right place, right time.

As if to rub salt into wound, other tribulations followed. Multi-instrumentalist and lead songwriter Adriano Cintra called it quits, claiming that his bandmates had allowed fame to go to their heads and, as a result, had practically forgotten how to play their instruments properly. As far as parting shots go, it was stark, industrial and absolutely unambiguous.

But it’s not all bad news. For their fourth album, the Sao Paolo quartet have enlisted TV On The Radio‘s Dave Sitek, a paladin of production whose credits include five Yeah Yeah Yeahs records, Santigold‘s Master Of My Make-Believe and a handful of his own band’s LPs, including 2011’s extraordinary Nine Types Of Light. With such talent in their corner, is it not the case that Lovefoxxx and co are about to turn a corner; about to rediscover their form; about to go toe-to-toe with their own best efforts, despite the loss of Cintra?

Yes and no. But mostly, no. Planta, you see, adopts something of a scattergun approach, the result of which is a hit-and-miss 11-track journey. Honey thuds forth with promise – ear-pricking kick drum and pizzicato synth – but sounds just a little too easy, a bit too dance-by-numbers. Hangover, meanwhile, skanks with abandon like the aforementioned Santigold – though it strays a little too close to No Doubt territory at times.

Likewise, the plodding Girlfriend is out of ideas from the outset. Dynamite takes an unsuccessful, unconvincing stab at the bombast that previously served CSS so well – coming across as noise for its own sake, it may be more suited to the stage – and though Sweet mimics the glitchy, fuzz bass-laden sound of Justice and the like, it is ultimately a pedestrian affair.

But credit where credit is due: Into The Sun crams myriad styles into five minutes that belie the band’s five-year lean spell – its careful composition wrought through a dense mix and a perfect sense of pace – while The Longcut-style Too Hot exhibits formidable indie credentials and The Hangout becomes a legitimate highlight as it juxtaposes cute, off-kilter guitar chords with Lovefoxxx’s unusually reticent demeanour.

In the end, though, Teenage Tiger Cat sums up the album and the band: they’re certainly having fun – and, in the moment, the listener is too – but the whole thing just feels so lightweight, as if the remaining members of CSS are struggling not to play their instruments but to get any magic out of them. Planta then provides a passable imitation of themselves, but sadly it’s nowhere near as good as they were.