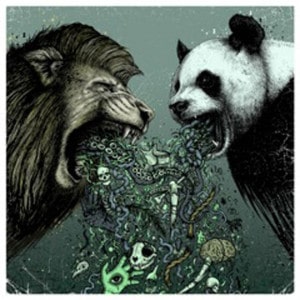 It’s safe to say that Dan Le Sac Vs Scroobius Pip have attracted rather a lot of critical scorn since the duo formed in 2006. Combining the rap-stylings of Pip with Le Sac’s electro layers, their 2008 debut album, Angles, repelled many due to way it preached to the listener. Yet while it was far from perfect, singles such as the Thou Shalt Always Kill and The Beat That My Heart Skipped were undeniably addictive, and intelligently addressed some interesting issues.

The Essex pair returned in 2010 with The Logic Of Chance, but like its predecessor, the record was incredibly divisive. Once again, Pip came across as a lecturer with a fondness for his own voice, veering from topics such as knife crime to the UK political climate. However well-intentioned this was, the vehement, in-your-face style it was delivered in was always likely to come across as pretentious to some, if compelling to others.

Now, following a break of almost four years – during which both Pip and Le Sac released solo records – the duo are back with their third effort, Repent Replenish Repeat. And, from the very off, it is clear that the lengthy time off has done little to diminish the angst. Opener Stunner sets the stall out straight away, with Pip stating: “I know it sounds weird/ I do want you to look back on this and smile but/ I kinda want that smile to be through tears.”

Lyrically, Pip has never sounded darker, while Le Sac complements the MC with some brash, industrial electronic beats, which are far heavier than anything on either of their last two records. Nightbus Sleepers continues the murky opening, with the filthy, glitched production providing the backbone for Pip’s observational lyrics, as he comically raps: “As two drunk girls gyrate, it serves to just frustrate/ the crowd of guys that did vacate their prostrate.”

Others may disagree, but Pip undoubtedly has a way with words when he is on form, especially when he sides on introspection rather than self-righteousness. This is demonstrated on Terminal, which is easily the most stripped-back and unfussy track on the record. Despite being clumsy in places, the song is an engaging first-person, twisted romance narrative, telling the story of a one-off, drug fueled meeting between two protagonists.

Elsewhere, Porter is a fitting partner to Terminal, with Le Sac’s simple, atmospheric production allowing Pip to deliver another assured and affecting first-person narrative that tackles terminal illness from the perspective of a hospital employee, while Entity sounds almost like an Nintendo game backing track – in a good way. However, the longer Repent Replenish Repeat goes on, the more inconsistent it gets, with the final third particularly difficult to get through.

Gold Teeth, which is apparently lined up as the next single from the album and features Flux Pavilion’s Joshua Steele on production duties, is a loud and rather annoying mess, one that will most likely have you reaching for the skip button. Then there’s the equally grating Stiff Upper Lip, which sees the return of angry, politically-charged Pip over a stuttering, checkered beat, before being finished off by a forgettable verse from Itch – formerly of The King Blues.

Ultimately, Repent Replenish Repeat is another workmanlike return from Dan Le Sac Vs Scroobius Pip. It is neither better nor any worse than The Logic Of Chance. But what is really telling is the lack of anything remotely resembling a standout track; there is no The Beat That My Heart Skipped or Get Better. Instead the focus is on darker lyricism and harder, broken beats. That’s all well and good in small doses, but by the end it  just becomes tiresome.