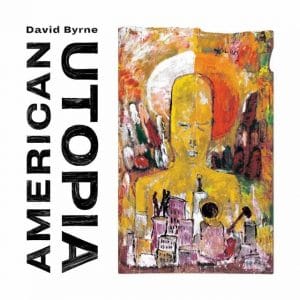 As artists age, they can go one of a few ways; they either bow out gracefully, beat a dead horse or continue to find and push their boundaries. You can kind of guess where it’s going to for someone who, quite literally, wrote the book on music.

David Byrne has been a constant force to be reckoned with, and as he’s getting older he’s settling in nicely to setting a fair standard of how you should do so. Though, of course, this isn’t how he draws you in.

The immediate, darling piano line that opens American Utopia on I Dance Like This recalls exactly the title’s notion – the idea of a perfect time when things were ok. Byrne’s storytelling vocals break through with the gentle touch of a grandfather telling a bedtime story, but there’s always that sinister turn. Taking an extreme left away from the melody lane it was moseying down, the track swiftly becomes a growling, atmospheric energy building exercise.

It would be quite easy to summarise Byrne with just this one track; it offers everything you’d expect, and then slaps those notions straight out of you and becomes something you didn’t realise you wanted. Much like the rest of American Utopia.

And, most simply, this is where Byrne thrives – where he holds you in the palm of his hand, refusing to give any more away. The first glimpse into this next chapter of Byrne’s story came from the prowling, yet celebratory, single Everybody’s Coming To My House. Chock full of action, at times it can sound as if the party is roaring onward downstairs while Byrne is upstairs dissecting his life, as the underlying bass line rumbles through the floor.

American Utopia itself isn’t a stranger to a party filled with people. The list of guest appearances is fairly substantial, including a rather peculiar pop up from Brit-indie promise-child Jack Peñate. Most notable though, is co-writing partner Brian Eno, who you can hear littered throughout. Even when it feels like you aren’t supposed to be a part of this party, he kindly lets you back in – helped by a melody that wraps you up and takes you home. Gasoline And Dirty Sheets has far more exotic undertones, touched ever so lightly with sitar at the beginning and allowing these ideas to flow gently throughout.

Of course, it’s not all stuck down in classic songwriting tropes – a couple of verses, a couple of choruses. Dog’s Mind is a sprawling, vocal-centric effort that highlights the innocence of our canine counterparts while the world is going to shit. Also, bonus points to Byrne for fitting the word ‘doody’ into a song that deals extremely well with the innocence we need to hold on to, in a time where Russian spies are being poisoned and walls are being constructed everywhere.

The magic of American Utopia truly lies in its use of sound. Eno’s classic barrage works wonderfully with the complexity of Byrne as a person. One offers the instrumentation to decipher what lies beneath while Byrne shines a trick of the light, occasionally turning it off to show you the welcome mat to where the party really is.

American Utopia is epic, it’s sprawling, it’s filled with everything but the kitchen sink, but most of all, it’s filled with promise. The promise that things aren’t totally awful – even when they seem it – and if they ever get a bit too heavy for you, David Byrne is here to welcome us home, no matter how much time passes.