The Decemberists – What A Terrible World, What A Beautiful World 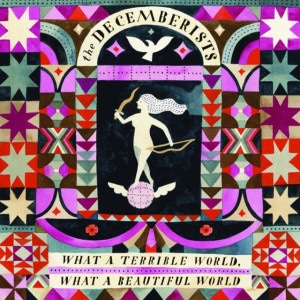 Upon the release of The Decemberists‘ sixth album, the US chart topping The King Is Dead in 2011, the band’s songwriter, frontman and resident author Colin Meloy declared that the band would be taking a break. Keyboard player Jenny Conlee was diagnosed with cancer in the same year – presumably a major reason for the band’s disappearance; with Meloy’s exploits into the world of children’s books also drawing his time, the hiatus was inevitable.

Four years later, studio album number seven arrives and it’s set to divide a loyal fanbase. The band are renowned for (occasionally controversial) storytelling, with lyrics artfully crafted, stretching their old English vocabulary like the most wordy of literature students; this is still evident but it’s generally less adventurous. One of the band’s undoubted masterpieces was 2006’s The Crane Wife, where three tracks surpassed 10 minutes in length as they explored new realms, pushing themselves beyond the norm. There’s none of that here.

The King Is Dead was a solid effort where folky acoustics came more to the fore, providing perhaps the most easily accessible album the Portland five-piece had ever released, and the new album’s predecessor is probably its closest cousin. REM’s Peter Buck had guested on the previous collection and there’s an REM-meets-folk feel to some of the new tracks too: The Wrong Year benefits from a gem of a descending spidery electric guitar riff alongside acoustic guitar and Conlee’s accordion for a catchy effort whilst single Make You Better is likely to be many listener’s highlight. Another infectious melody takes hold after beginning to a solitary electric guitar riff in the style of Billy Bragg, before transforming upon the introduction of percussion and vocals leading to a sublime chorus.

Meloy claims that the new songs are possibly amongst the most personal he has written and, with his books draining his literary prowess, lyrics fell back into less striking territory for songs written during the same period. There are songs directed at their fans themselves, such as opener The Singer Addresses His Audience, and it’s another cracker; beginning to gentle guitar strumming and vocals the song builds in intensity upon the introduction of drums around the two and a half minute mark leading into a crescendo underpinned by strings, wild guitaring and choral singing. 12-17-12 is another personal, reflective moment, this time brought on by Meloy witnessing President Obama’s national address that was broadcast following the shootings at a Newtown, Connecticut school one fateful day in 2012, the conflicting album title taking its name from the lyrics within the sparse, atmospherically charged acoustic cut.

Footholds aren’t necessarily that forthcoming in any Decemberists long player but Cavalry Captain makes it easy here: a pounding beat alongside melodic verses provide the perfect accompaniment to a thoroughly captivating earworm of a synth line that will be hard to shake off. Album closer A Beginning Song is another catchy cut, dramatic chord shifts pivoting a loud/quiet number that twists this way and that. Other tracks touch upon a familiar sea shanty theme (Better Not Wake The Baby), ‘50s bubblegum pop (Philomena), delicate folk (Carolina Low) and twanging Duane Eddy like guitaring for Easy Come, Easy Go; the eclecticism is set to test, for sure, and this is where fans will be won and lost.

The album was constructed in a different manner to previous collections. “We had all the time we could want, no schedule, no tour, no expectations,” claims Meloy, and there was “little direction or focus”. Whilst that may have been a good thing for the band, the lack of cohesion for the album as a whole may prove to be a turn off for many, perhaps not seeing much longevity amongst their staunchest supporters in particular. For others, though, it’s likely to still be spinning when the band’s name comes around on the calendar once again.