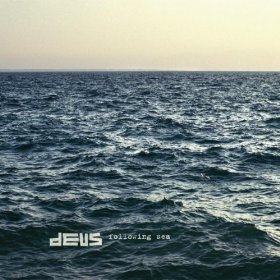 Experimental art-pop from Belgium may not be everyone’s cup of tea, but dEUS do it better than most. They’ve been noodling away quietly now for 21 years (with a lengthy hiatus in the early 2000s), with last year’s Keep You Close receiving the best reviews of their career to date. The quartet have obviously been on something of an artistic roll, as Following Sea arrives just nine months after Keep Yourself Close, released online earlier this month with barely a note of fanfare.

Recorded while on tour last year, and released as soon as possible in order to “get the music out whilst it’s still fresh”, it’s perhaps inevitable that Following Sea doesn’t flow as well as an album that’s been worked on for a number of months, even years, would do. So, while there’s a fair amount of great songs on here, there’s also a fair degree of filler. The bewildering mix of styles and atmospheres on display (one minute it’s sinister and foreboding, the next minute you’re listening to perfect guitar pop) doesn’t help with the sense of a lack of flow.

Yet there are some mighty fine moments on Following Sea. Opening track Quatre Mains makes for an attention-grabbing start to the record, sung entirely in French with Tom Barman’s gravelly voice exuding a real sense of foreboding. It’s dramatic and intense, with a pleasing air of mystery draped over the whole song. They stick to English for the rest of the album, but they remain with the sinister vibe for Hidden Wounds. On the spoken word verses, Barnum sounds a dead-ringer for Somewhere Down The Crazy River-circa Robbie Robertson, while there’s a definite nod to the unsettling malevolency of Tom Waits to the song’s orchestration.

Then, without warning, dEUS go all uplifting and rocky on us, with the raucous Girls Keep Drinking sounding like the soundtrack to a lost Budweiser advert, while the best track here, Crazy About You, shows off the band’s softer side, a beautifully quirky love song guaranteed to warm up even the coldest of summer months.

Lyrically, dark subjects are touched upon – Heavy Wounds is apparently about post-traumatic stress disorder suffered by soliders, while The Give Up Gene tackles the recent Costa Concordia cruise ship disaster. Then, as if to balance out the serious stuff, they’ll call a song something delightfully quirky, such as Fire Up The Google Beast Algorithm.

Unfortunately, that marvellously titled track is one of the weaker tracks on Following Sea, with Barnum’s spoken-word growl becoming a bit wearying towards the end of the album. It’s also one of a few songs here that are more style than substance, being heavy on the dramatic atmosphere but light on actual melody.

Following Sea is more of a companion piece to Keep You Close than a fully-formed follow up – while there’s not much to encourage the uninitiated to become new converts, there’s plenty for the longstanding dEUS fan to pick over.