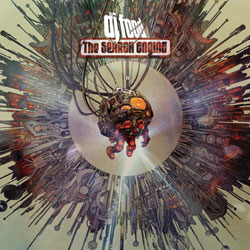 Now the vehicle of Strictly Kev, DJ Food was, at one stage, a collective of four prolific electronic experimentalists. These fruitful few embodied the metaphor of the project’s title: “Food for DJs”. Neither having publically produced nor distributed any material in over 10 years, what could this one-man act possibly feed the long-waiting fan base in 2012?

He is able to encompass a variety of Moog-like textures, early Graham Central Station soft organs, Krautrock and many other elements into one piece, as evidenced in the introductory All Covered In Darkness (Part 1). But the essence of the project is in his capacity to fuse adjacent sounds together, in order to create different dynamisms, thus forming diverse styles throughout the course of the 56-minute LP.

Industrialised, yet ever so bubbly, DJ Food has packaged an element of the New York City post-punk method; replicating bass-line ostinatos and irregular drum rhythms. Take, for example, the pragmatic piece, Giant, which features The The’s Matt Johnson. Using him on vocals, DJ Food applies the post-’80s punk lyricism in a repetitive but cheerfully winding manner, “How can anyone know me when I don’t even know myself”.

And while the majority of this new release sharply focuses on heavy surfaces, DJ Food also brings a retro, yet therapeutic, ambience to being. With the short and appealing Intermission: A New Language and Outermission: Sheer Fiction, Strictly Kev constructs brief bridges between the heavy-heated pieces and still maintains his theme of the “search engine” controlling the diurnal life.

Bordering on his ambient-lounge mode, percussive A Trick Of The Ear furnishes what he executes in his admirable, serene interludes, but in an accessibly more jazzy fashion. Close to Miles Davis‘ Get Up With It jazz-fusion release, DJ Food loops and layers numerous bongos and congas, of all widths and skins, over one another. Exuberant, yet tranquil at the same time, A Trick Of The Ear is composed of aged sounds, between the old-style bass pluck, the constant rhythmic percussions and the interval Fender Rhodes stream. Then again, DJ Food delivers the composition in an originally contemporary manner.

Jazzy, but more electronically orientated, lengthy Magpie Music consists of numerous opuses of a variety of genres and calibres. It becomes problematic in that sense. The piece is broken down into so many fragments, it’s almost as though the DJ forgot to differentiate the tracks in the edit. However, it is also evident that he didn’t eschew effort in creating such a piece. It’s a song that covers just about any sampling technique in the book. Whether it’s the Boards Of Canada rewind, the cross-fertilisation of opposite genres in one track, or the conversational vocal sample, DJ Food manages all of his skills in one, 11-minute long track.

We’re really living in that sampling era, where there is an array of different standard musicians generating songs from blatant samples and creatively adjusted samples. So, at this stage, it is really the judgement of how well these musicians contribute to their work with the samples used. The barefaced Daft Punk-like sampling culture is really ephemeral, now that DJ Food has upped the calibre of practical electronica and aesthetic trip-hop.