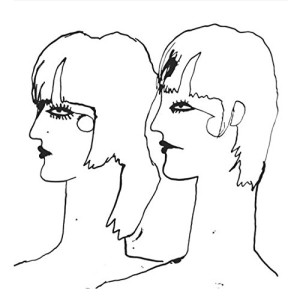 “Collaborations don’t work,” we were told recently by FFS, the none-more-arch supergroup of Sparks and Franz Ferdinand, “I’m gonna do it all by myself.” Two artists that have done just that for the best part of a decade are Tim Presley and Cate Le Bon, ploughing their psychedelic furrows through California and Carmarthenshire, Presley having released six albums as White Fence and Le Bon a trio of charming, folkish solo records.

Although the peculiar press notes for DRINKS’ début insist that it’s “a solo project” with “…one mouth, one set of lungs, one mind and four legs,” neither artist is exactly averse to working with others. Presley’s 2012 album Hair was a joint effort with garage-rock capo di tutti capi Ty Segall, and he has also been one of the sixty-plus musicians who have at one time or another considered themselves to be members of The Fall. Le Bon, meanwhile, has recorded with Neon Neon, Manic Street Preachers and The Chemical Brothers, and also played guitar in a touring line-up of White Fence. This is where the first seeds what became DRINKS were sown, the plan put in motion once Le Bon upped sticks to LA for the recording of 2013’s Mug Museum.

Right from the outset it’s obvious that DRINKS aren’t merely picking at the best bits of the contributors’ previous work: the Californian psych-folk tinge to opener Laying Down Rock is pulled in an altogether different direction by the minimalist feel and repeating hook, more Young Marble Giants than Moby Grape. Cate and Tim have said that around the time of making the album they were listening to a lot of UK post-punk and this is quite apparent in places: early highlight Focus On The Street is reminiscent of Wire’s Chairs Missing, sitting on the smudged line between punk and psychedelia, and there’s a Slits/Delta 5 feel to the groove that bubbles under the heavily effected Cannon Mouth.

She Walks So Fast is the first of three excellent tracks at the centre of the album, wedding early Modern Lovers to a Captain Beefheart-like stop-start riff, followed by the wonderfully wrong-footed pop of the title track: it starts with Le Bon reciting a bizarre schedule over a stark, metronomic backing – “Quarter to five, feeding time”; “Seven to three, check on me,” and after a maddeningly catchy chorus or two, the rest of the band enter in gloriously ramshackle funk fashion. The mood is darkened a little by Spilt The Beans’ spooked refrain: “windows in my house,” Cate sings in a flattened drawl, “ruined me;” a lengthy instrumental section, full of haunted fairground organ and meandering Marquee Moon-esque guitar parts, epitomises the loose, improvisational provenance of a lot of the tracks here.

Only on Tim, Do I Like That Dog? does this possibly become problematic, consisting as it does of seven minutes of noodling and Cate repeatedly posing the titular question to Tim, apparently borne from a game that they play while on the road. It’s Trout Mask Replica cross-bred with Crufts and, depending on your tolerance levels, will be either a mildly amusing diversion or a downright annoyance. ‘Normal’ service is resumed with the aptly brief Cheerio, all echo-laden vocals and early Pink Floyd keyboards and the ominous rumble of Time Between, which closes the album.

Le Bon and Presley are certainly a potent cocktail and this is one of the most uncommonly satisfying releases of the year so far, whose charms reveal themselves best after a few plays. At first, you might not feel like your thirst has been quenched by these DRINKS, so you’ll order a few more, but be warned: they’ll creep up on you.